Although General Terminus is closed, the remainder of this railway provides a useful route across the south side of Glasgow allowing freight from the Paisley Gilmour Street direction to run in the Rutherglen direction without reversal. This link passes through a tunnel and is largely in cuttings resulting in its colloquial name the 'Burma Road'.

Formerly it served the quayside facility at General Terminus on the River Clyde which replaced Windmillcroft Quay which was the waterside terminus of the Polloc and Govan Railway.

The 'main line' extended the Polloc and Govan Railway to the new General Terminus quadside depot and sidings on the south bank of the River Clyde, replacing Windmillcroft Quay a little to the east.

This junction was between Terminus Junction and Scotland Street Junction on the mineral line to General Terminus. The location was overshadowed by Shields Road [CGU] station to the north of the City of Glasgow Union Railway and Shields station to the south on the Paisley Canal Line (Glasgow and South Western Railway).
...

Scotland Street Junction signalbox in the shade of the M8. This box controlled the exit from General terminus and the junction between the lines from ...
Ewan Crawford //1987
1 of 1 images.

This large goods and mineral terminus served a quayside on the River Clyde.
... 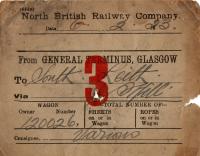 North British Railway wagon label for a wagon from General Terminus to South Leith via (where?). ...
Bill Roberton 06/02/1923

Looking south towards Scotland Street Junction over the approach to General Terminus not long after track lifting in 1987. The location was reached ...
Ewan Crawford //1987

This was the yard at General Terminus shortly after the track was lifted. The area was being landscaped to become a carpark for the Glasgow Garden ...
Ewan Crawford //1987

This allowed access to General Terminus from the Barrhead line. A link from this served the Tradeston Gas Works. Although there were coal mines on that line, the curve increased in importance when the Barrhead line was extended south to Kilmarnock. 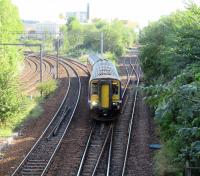 A Kilmarnock service passing Muirhouse South on 25 August 2018. The line to the right leads to Larkfield Junction and has no passenger services. ...
David Panton 25/08/2018 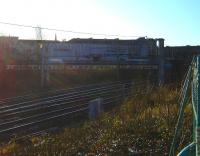 A pair of 156s creeping through the shadows onto Muirhouse South Junction off the little used link from Larkfield Junction on their way to Crossmyloof ...
Fraser Cochrane 29/12/2008

This junction was formed in 1879 when the Glasgow Central Station (Caledonian Railway) (Gordon Street lines) met the 1849 General Terminus and Glasgow Harbour Railway close to Strathbungo Junction (just to the south).
...

This is a double junction opened in 1894 to complete the Cathcart District Railway. It provides a connection across the older 1849 Glasgow Harbour and General Terminus Railway to the Glasgow Central approach lines. Rather than cross that line on the level a double junction was formed.
... 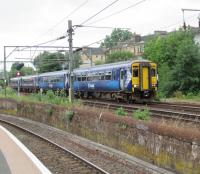 A service from East Kilbride on the last hop to Glasgow passes the junction on 21st July 2018. Photographed from the Platform of Pollokshields East, ...
David Panton 21/07/2018

The Saturday morning 9.56am Glasgow Central - London Euston via Kilmarnock approaching Muirhouse Junction on 8 August 1964. Locomotive in charge is ...
G H Robin collection by courtesy of the Mitchell Library, Glasgow 09/08/1964 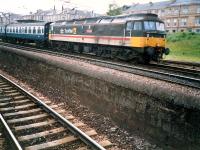 156450 passes Muirhouse Central Junction with a service from Barrhead. Pollockshields East station is on the left and the 'Terminus Curve' bears ...
Bill Roberton 10/09/2018
4 of 6 images. more

This link had two uses; it allowed trains from the Glasgow and Paisley Joint Railway to join the Polloc and Govan Railway without needing a reversal and it gave access to General Terminus, albeit via a reversal.

Shields No 1 Junction is the junction between the Glasgow and Paisley Joint Railway of 1840 and the General Terminus and Glasgow Harbour Railway of 1849. The latter now longer accesses General Terminus but continues in its role as a 'bypass' of Glasgow Central for freight from Ayrshire to Lanarkshire and vice versa.
...

This was a complex four way largely goods handling junction around 12 tracks wide including sidings. To the west and east was the Glasgow and South Western Railway's 1885 Paisley Canal line. A 1886 Caledonian Railway connection to the north east connected to the General Terminus and Glasgow Harbour Railway at Maxwell Junction. To the north west was a [[Glasgow and Paisley Joint ...

This was the junction between the 1849 General Terminus and Glasgow Harbour Railway and the 1886 Paisley Canal Line (Glasgow and South Western Railway). It provided a goods line up to Bellahouston No 1 Junction. The spur was built by the Caledonian Railway. The signal box opened with the junction in 1886. The box was on the north side of the junction.
...

This branch ran from Kinning Park Junction to Kinning Park Goods. The goods yard is now closed, but a link was made at the west end of the site allowing trains to burrow under from Shields West Junction to Terminus Junction.

This junction was between Terminus Junction and Scotland Street Junction on the mineral line to General Terminus. The location was overshadowed by Shields Road [CGU] station to the north of the City of Glasgow Union Railway and Shields station to the south on the Paisley Canal Line (Glasgow and South Western Railway).
...

This large goods station was located on the north side of the Glasgow and Paisley Joint Railway, however its approach was from the General Terminus and Glasgow Harbour Railway its connection being at the east end of the yard directly below the Paisley line from which it ran east to Kinning Park Junction. The yard was an addition to the General Terminus line and did not open with it.
...

26034, tool van and crane take the dive under to join the Burma Road at Shields Junction. Shields Depot behind. ...
Ewan Crawford //1987

View of Shields Road depot, the dive-under line (foreground) and the lines to Paisley Canal and Paisley Gilmour Street. Access by kind permission of ...
Ewan Crawford //1988

Looking east at Shields West Junction (roughly the locale of the former Shields Junction No. 1) during works. The track to the right is lifted in the ...
Ewan Crawford 27/12/2007
4 of 4 images.