The Royal Naval Train, more commonly known as the Jellicoe Express (named for Admiral Sir John Rushworth Jellicoe (1859-1935)), was run for the Royal Navy to carry service personnel during the Great War. It linked London with Thurso for Scapa Flow where the Grand Fleet was based - 717 miles. On its journey it passed by other naval bases such as Rosyth and Invergordon. The train ran daily from 1917. It was revived in the Second World War. Due to the duration of the journey (and its purpose) it also had the name The Misery (a 6pm departure from London arrived at Thurso at 3.30pm the next day). Fortunately, there were several pauses for tea along the way.

This name refers to the heavy coal trains dispatched to Grangemouth for the Grand Fleet.

(with additional material by Railscot)

We have now passed the third anniversary of the first Jellicoe Express plaque unveilings, at Edinburgh Waverley and Inverkeithing – and the first anniversary of the last, at Forsinard. From beginning to end, nineteen such events were brilliantly choreographed by Moya McDonald and starred Captain Chris Smith RN and Hon Johnny Jellicoe, with a variety of guests ranging from Lords Lieutenant and Jamie Stone MP to Geordie Adams, who had fired the train in the Second World War and did the honours at Helmsdale.

London Euston, the starting point for the Jellicoe Express in the capital.

Crewe the major junction with lines running north and south, to North Wales, Liverpool and Manchester.

Preston another major junction with lines to Blackburn, Leeds, York, Blackpool and Fleetwood.

Carlisle this major junction is close to the England/Scotland border with two routes running south to London, three routes running north into Scotland one with a connection west for the link via Stranraer to Ireland. East is the line to Newcastle and south west to Cumbria, its steelworks and the Barrow Shipyard. The line ahead to Hawick is hard going but quieter and it ultimately approaches Edinburgh from the east allowing the train to continue north over the Forth Bridge without reversal.

Having reached Hawick [2nd] the landscape changes from wild moorland to farmed countryside. The plaque unveiled at the Leisure Centre is the only reminder of the passenger station.

Although the original Galashiels [1st] station has not survived the line re-opened from Edinburgh to Tweedbank to passengers in 2015 with a new Galashiels station. The main station in Scotland's capital, Edinburgh Waverley, is entered from the east. Trains run west to Glasgow Queen Street High Level, Falkirk, Corstorphine, Stirling and to north Leith and Granton - and many, many other destinations.

Inverkeithing station, close to Rosyth Dockyard is reached after crossing into Fife over the Forth Bridge passing other naval locations such as Port Edgar.

Having traversed Fife Perth is reached, junction for Dundee, Aberdeen, Stirling and beyond. The train takes the line north, the main line following the upper Tay initially.

Having crossed the watershed Kingussie, the capital of Badenoch, is reached. The line follows the Spey.

Aviemore was the junction between the lines to Inverness, Forres and Aberdeen via the Speyside line. The train takes the route to Inverness, crossing high ground on a magnificently engineered line.

Inverness, capital of the Highlands, has a port on the River Ness (where the Inverness Ammunition Depot is located), the northern end of the Caledonian Canal (with mines traffic in the Great War at US Naval Base 18) and Inverness is an important railway junction with lines radiating to Glasgow Queen Street High Level, Edinburgh Waverley, Aberdeen, Kyle of Lochalsh, Wick and Thurso.

Dingwall at the west end of the Cromarty Firth and the junction for the line west to Kyle of Lochalsh, much involved with mines traffic in both wars. 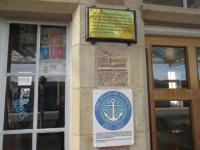 Alness was at the west end of the vast Invergordon Naval Base in the Cromarty Firth and near US Naval Base 17. A railway is laid close to the shore, in addition to the public railway, connecting the naval bases together. 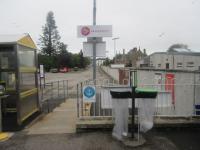 Invergordon station was north of the new Admiralty Pier and the large ship repair establishment for the Grand Fleet.

Near Tain the line turns away from the Cromarty Firth to approach the Dornoch Firth.

Having followed the coastline to Helmsdale the line turns inland climbing into the flow country. 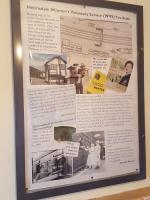 In the midst of the flow country Forsinard is reached, one of several such lonely outpost stations with a passing place.

Following reversal at Georgemas Junction the train finishes its journey at Thurso, a port in its own right and near Scrabster Harbour. A boat journey will take passengers on to Scapa Flow, the great natural harbour in Orkney.