This line is closed. The line was equiped with passenger stations which were never opened. The line was only opened for freight. The junctions at Arkleston were prepared but the connections never laid in. Track ran from Paisley East to the southern Arkleston junction and stopped just after the junction.

The system was accessed, latterly, from St James Junction, just west of Paisley St James station, which had a large goods yard. The small shed there may have opened in connection with it.

This line was built for several purposes. It was to provide a Caledonian Railway owned route to Greenlaw Goods, a wholly Caledonian Railway owned route from Lanarkshire to Greenock and to provide a passenger route between Paisley and Barrhead serving the area between. The Glasgow and Paisley Joint Railway was jointly owned with the Glasgow and South Western Railway, used to reach both Greenlaw Goods and Greenock. A goods depot in Paisley was to be established.

This provided a link between the Caledonian Railway's Greenock line and the Lanarkshire and Ayrshire Railway. The line was, after severance at Lyoncross Junction, operated from Paisley St James as this best served the goods depots. Walkinshaw to Barrhead (Blackbyres Junction [CR]) was single track and south to Lyoncross Junction was originally double track.

This was the northern of a triangle of lines at Walkinshaw. The junction allowed a train from the Barrhead direction to join the Greenock line. The Caledonian Railway's plan was to create a route fully owned by the CR between Greenock and Glasgow via Barrhead and Cathcart via the Paisley and Barrhead District Railway. It was redundant after the grouping of 1923 which brought the CR and ...

View south, in 1988, of the junction where the sidings for Pressed Steel left the Paisley and Barrhead District Railway. A loop was retained on the ...
Ewan Crawford //1988

This island platform station was completed but never opened. The line was completed in 1905 and opened to goods only. A station building was built and there was a signal box to the south of it on the platform. An entry subway was built at the north end leading to Main Road/Beith Road.
... 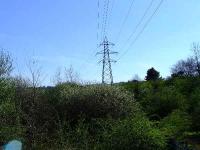 Looking South from the location of Ferguslie station where the PBDR ran under the Paisley Canal Line. All traces of the railway here are now gone, now ...
Graham Morgan 12/04/2007 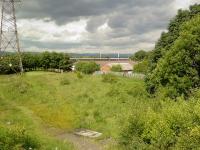 Looking North to site of Ferguslie Station from Paisley Canal Line with Paisley to Ayr line in background. ...
Graham Morgan 26/06/2006

This was an island platform station which never opened. There was a goods yard on the south side of the line approached by reversal from the westbound track. The line was single track on approach to the station from either direction. The west end of the station was crossed by a bridge and access to the platform was by stairs. There was a station building. The goods yard was opposite the GSW ...

This was a double track junction immediately to the west of Blackbyres Junction [GSW] .
...

This station was never opened. There were two platforms on a raised line complete with platform buildings with canopies. The station at street level bore some resemblance to Dumbarton Central street level buildings.
...

Looking east at the site of Barrhead New station, which never opened. The line was on a high embankment here. At this location, the west end of the ...
Ewan Crawford //1998

Just north of the site of Barrhead South viewed from the south. ...
Ewan Crawford // 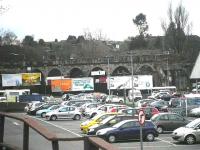 Part of the surviving section of the viaduct that once carried the Paisley and Barrhead District Railway through Barrhead. View south on 4 April 2012. ...
John Yellowlees 04/04/2012

Looking south along the A736 at Barrhead in the summer of 2006. In the background is the remaining section of the viaduct that once carried the ...
John Furnevel 17/08/2006

This two platform station was completed but never opened. The double track line was completed in 1905 and opened to goods only. Station buildings were never provided. However the station did open to goods traffic.
...

This is a disused concrete six arch double track viaduct. The viaduct crosses the minor Aurs Burn which runs in a deep defile. It is located in the south of Barrhead. The approximate length is 350 ft.
...

Not easy to photograph in the summer! Other than the short length of viaduct in Barrhead itself, the Aurs Burn Viaduct is probably the most ...
Ewan Crawford 28/09/2017

This junction was immediately west of the never completed Lyoncross station. The signal box was at the west end of its never built island platform and opened with the junction in 1905.
...

A 314 passes the site of Lyoncross Junction. The Barrhead and Paisley route was in the trees behind the train. ...
Ewan Crawford 14/09/2017

This was intended to provide a link to Greenlaw Goods in the east of Paisley and the shortest connection for passengers between Paisley and Barrhead. The line was double track.

This was a double track junction immediately to the west of Blackbyres Junction [GSW] .
...

The Laundry in the north part of Dykebar Hospital was rail served by a short branch. This connected to the Paisley East to Blackbyres Junction [CR] at a south facing junction. ...

This island platform station never opened. There was a station building and a signal box immediately to the south of the building on the island platform. There were no goods facilities. To the north and south the line was double track. The southbound line was lifted first.
... 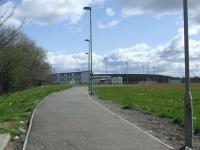 Looking east, the path runs along the approximate line of the trackbed of the Pasiely & Barrhead district railway at the location of Dykebar station. ...
Graham Morgan 05/04/2008 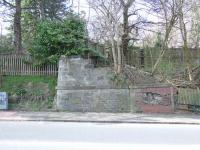 Remains of the Hawkhead Road railway bridge just to the west of Dykebar station in Paisley ...
Graham Morgan 05/04/2008

The derelict Dykebar station on the line from Paisley East to Barrhead, photographed in 1964 from the west in Hawkhead Road. The stations on the ...
Colin Miller //1964

Also known as Paisley East Goods. This goods depot was on the west side of the large stone built embankment of Paisley East station. Unlike the station, the goods yard opened. The yard was approached from a loop off the northbound line, this loop being south of the station. Running round was a little inconvenient as with the connection being onto the loop track. The goods line crossed Lacy ...

This two platform station was built but never opened. The railway opened to goods in 1906. Nearby was the Lacy Street Depot, the goods yard for the station.
...

Remnants of the Paisley & Barrhead District Railway photographed in the Summer of 2004. The northern abutment of the bridge that carried the line over ...
Colin Miller //2004

Excuse me, does my abutment look big in this? The remains of the former P&BDR bridge on the south side of Barshaw Drive, Paisley, now forming ...
Colin Miller //2004 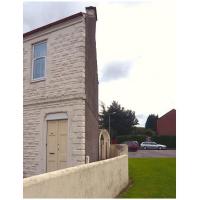 The 'squinty house' in Seedhill Road, to the west of Hawkhead station. The view shows its peculiarly-angled gable, which came about as a result of the ...
Colin Miller 02/08/2010

The office/shop once used by coal merchant John Lyon in Glasgow Road, Paisley, (just round the corner from the former Paisley East ...
Colin Miller 25/12/2008

The name of this junction is assumed - it was never laid in.
...

This junction for the [1902 [Paisley and Barrhead District Railway]] was just west of Paisley St James station on the 1841 Glasgow, Paisley and Greenock Railway. In its final days the branch was a single track serving the former Pressed Steel Co Ltd works.
...

Looking west at the former junction to the west of Paisley St James station. The branch still existed to Linwood but the junction itself had been ...
Ewan Crawford //

This branch left the line at Ferguslie.

This island platform station was completed but never opened. The line was completed in 1905 and opened to goods only. A station building was built and there was a signal box to the south of it on the platform. An entry subway was built at the north end leading to Main Road/Beith Road.
...

Looking South from the location of Ferguslie station where the PBDR ran under the Paisley Canal Line. All traces of the railway here are now gone, now ...
Graham Morgan 12/04/2007

Looking North to site of Ferguslie Station from Paisley Canal Line with Paisley to Ayr line in background. ...
Graham Morgan 26/06/2006

This goods and mineral yard was at the east end of the short Meikleriggs branch from the south end of the never opened Ferguslie station. The branch also served the Burnbank Chemical Works. The goods yard competed with the Glasgow and South Western Railway owned Ferguslie Goods to the north. Both served the area and the Ferguslie Thread Works, Ferguslie Dye Works and other ...