This junction opened in 1879 when the Leith North, which had opened in 1864, was converted for passenger use. A separate line ran from here on the south side of the original goods line to North Leith.
... 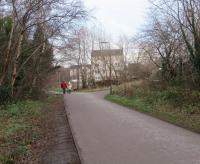 The location where the CR's Leith New Lines left the Leith North branch, seen in January 2019. There was a small mineral depot where the flats now ...
David Panton 18/01/2019 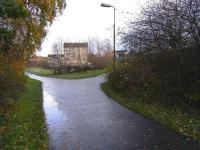 The former Newhaven Junction - goods sidings fanned off to the right, quickly followed by the line to Seafield. Looking east towards Leith on 25 Nov ...
David Panton 25/11/2009
2 of 2 images.

This was a two platform station opened on a short passenger line between Newhaven Junction and North Leith in 1879. It was parallel to, and to the south of, the goods and minerals line of 1864.
...

Looking east towards Leith North through Craighall Road bridge on 15 March 2009. Remains of Newhaven station can be seen beyond the bridge. [Ref query ...
John Furnevel 15/03/2009

Looking north across the platforms at Newhaven station on the Leith North branch in 2009. View is from the westbound platform below the station ...
John Furnevel 15/03/2009 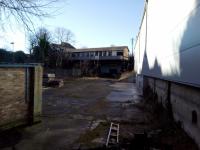 Four tracks passed under the (surviving) station building at Newhaven. The passenger lines, now a cycleway, were to the left of this view which looks ...
David Panton 09/02/2018

Looking east across Craighall Road at the former Newhaven station on 2 May 2011, with Trinity Academy standing in the background. The old station ...
John Yellowlees 02/05/2011
4 of 17 images. more

This junction was immediately east of Newhaven station. A connection was made from the goods lines (the original lines dating from 1864, to the north) to the passenger lines (dating from 1879 and to the south) allowing a train from the west to cross to the passenger lines and then enter Leith High Depot (also known as George Street Mineral Depot). The depot was on the south side of the ...

This was the passenger terminus for the Caledonian Railway Leith branch. The station and its approach from Newhaven Junction was added to the original goods only line of 1864 in 1879.
... 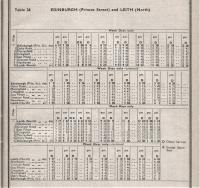 Extract from the Scottish Region timetable for winter 1960-61 showing the Princes Street to Leith North line. Unusually for the period the table is ...
David Panton 12/09/1960

The Caledonian's Leith North branch (closed 1962) has long been coverted to a cycleway - except for the last couple of hundred yards where things fall ...
David Panton 24/05/2015

A Sunday morning jogger takes the former Caledonian route heading east towards Leith Docks on 15 March 2009 and is just about to pass below Lindsay ...
John Furnevel 15/03/2009
4 of 16 images. more