This railway is closed. It was a single track line which largely hugged the coast between Montrose and Inverbervie. There were two large viaducts, both of which still stand: North Water Bridge Viaduct (by far the larger) and Dinfinella Viaduct (the tallest).

It began in the Caledonian Railway sphere of influence but was bought by the North British Railway. Despite several possible attempts to extend north to Aberdeen, providing a route independent of the Caledonian, this never happened.

Most of the route can be walked.

Bervie has been bypassed by the Aberdeen Railway, the costs of construction resulting in a further inland route.

This was the junction between the branch from Dubton to Montrose [CR] of the Aberdeen Railway and the later Montrose and Bervie Railway.
...

64615 at Broomfield Junction with the 1960 RCTS/SLS Joint Scottish Tour. To the left is the line to Dubton, the train is coming off the Bervie line ...
WA Camwell (Copyright Stephenson Locomotive Society) 16/06/1960
2 of 2 images.

This single track 11 arch masonry viaduct crosses the River North Esk to the north of Montrose.
...

North Water Bridge Viaduct viewed from its west side. In the mid 90s illuminating the bridge at night was considered by the council. This photograph ...
Ewan Crawford //1995

This was a single platform station on the west side of the single track Montrose to Inverbervie railway.
...

The site of St Cyrus station (closed to passengers in 1951) looking north along the trackbed towards Inverbervie on 7 November 2006. The refurbished ...
John Furnevel 07/11/2006 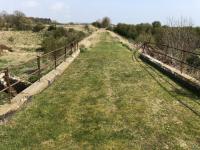 18th April 2019 was a nice day and I fancied exploring St Cyrus and the surrounding area. This was taken at Bush looking northwards towards ...
Duncan Ross 18/04/2019

Reclaimed overbridge on the Bervie branch south of Lauriston station in November 2006. The station stood on the other side of the bridge, in an area ...
John Furnevel 04/11/2006 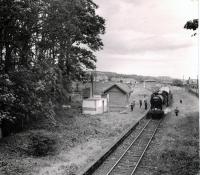 View north along the flooded trackbed of the Bervie line away from Denfinella Viaduct. ...
Grant McGill 20/03/2018 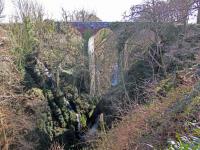 Denfinella Viaduct showing the great height of the viaduct compared with its length. ...
Grant McGill // 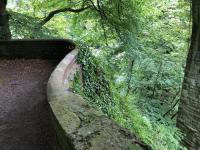 It's difficult to fit the full height of this bridge with a camera phone. Note the viaduct to the right and large drop down into the Den Finella. ...
Duncan Ross 12/06/2018
4 of 5 images. more

This was a private halt to the east of Brotherton Castle. It had a single timber platform on the west side of the line with wooden steps climbing the high bank to its west.
...

This was a halt on the line between Montrose and Inverbervie.
...

This was a single platform station with the platform on the south side of the line. There was a footbridge to the east and beyond that a loop with a goods yard siding serving a goods shed, the siding being approached from the north east.
...

Looking north from hills above Gourdon over town, harbour and former course of railway. ...
Ewan Crawford //
2 of 2 images.

This terminus was located close to the shore to the south east of Inverbervie. It had a single platform, on the west side of a loop, and a goods yard on the east side, approached, like the passenger station, from the south. The layout of the station was spacious.
...

Trackbed of the Inverbervie branch in May 2013, looking towards the terminus some 400m to the north. The sign points towards the next two stations on ...
Brian Taylor 26/05/2013 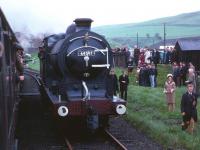