This line extended the Dundee and Arbroath Railway to Dundee from near Craigie.

Most of the Dundee and Arbroath Railway had been relatively easy to build across farmland close to the coast. Here a very large cutting was required at Craigie and long embankment required across the coastal margin to reach Dundee from the east. In addition this portion of the line, although built by the railway company, had to be handed over to Dundee Harbour Trustees ownership who would then rent it back to the railway. Further there were disputes about access to the sea from properties which previous had sea access, now blocked by an embankment. This was an expensive and difficult line.

It was first opened from Craigie to another temporary station Roodyards. Then extended to Trades Lane. Trades Lane was to be rebuilt considerably at a later date, and relocated a little to the east, to become Dundee East.

There were connections to the Harbour Trustees lines which served the docks and those which extended west to Dundee West through the streets.

Craigie was a temporary terminus consisting of a platform erected by the Broughty Ferry Road level crossing near Craigie House. The house was to the north.
...

When the line was built this was countryside and seashore with very little immediately nearby. Craigie House was to the north. By 1900 some development had begun and was encouraged by the opening of the station. The temporary terminus Craigie was to the east by a level crossing. The road was lifted onto a bridge as traffic increased.
...

An Aberdeen bound train heading east from Dundee in the summer of 1981 approaching the site of the former Stannergate station. Photographed from the ...
John Furnevel 11/08/1981

A Class 47 takes a Glasgow - Aberdeen train away from Dundee towards Stannergate in 1981, passing Carolina Port power station on the left. The ...
John Furnevel 11/08/1981

This terminus was at the south end of Roodyards Road and was approached from the east. A part of the site may be under the East Camperdown Street road bridge. This terminus replaced the temporary Craigie terminus to the east and was in turn replaced by the extension to Dundee Trades Lane. ...

This signal box was on the south side of the line east of Camperdown Junction and 'Dundee East No 2 Gates' box and west of the site of the very short lived terminus Roodyards terminus.
...

This large mineral depot was to the north of Dundee East station, on the north side of East Dock Street which was crossed by a level crossing. The yard was approached from the east.
...

This junction was east of Dock Street Tunnel, Dundee. It was the junction between the Dundee to Arbroath line and the later lines opened with the Tay Bridge.
... 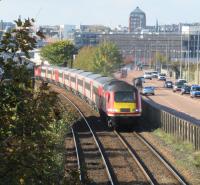 The morning Leeds to Aberdeen service has run for many years and gone through a variety of operators. This LNER one has just passed Camperdown ...
David Panton 10/10/2018 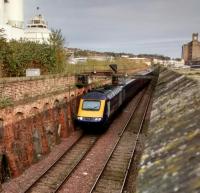 47467 accelerates a Glasgow Queen Street - Aberdeen train away from Dundee, shortly after completing the climb from Dock Street Tunnel and clearing ...
John Furnevel 04/02/1982

This was a terminus in the east of Dundee. It was originally the terminus of the Dundee and Arbroath Railway. The station became redundant as local lines closed and longer distance services transferred to Dundee station which was on a through line. With the opening of Dundee station, Dundee East was left on a short branch from Camperdown Junction.
...

This ultimately unnecessary terminus of the D&A Joint railway was a couple of hundred yards from Camperdowm Junction where the D&A was joined by the ...
David Panton 31/05/2016