This was a three platform station and junction. There were two platforms on the route between Elgin East and Keith via Dufftown and one platform on the Strathspey route to Boat of Garten. To the north on the Elgin route the line almost immediately crossed the Craigellachie Bridge to reach Dandaleith.

There was a large goods yard on the west (Strathspey) side of the station, approached from the south. This yard was equipped with a large goods shed, sidings and (on the west side) a turntable. A particularly long siding ran parallel, and to the south of, the Boat of Garten route.

The station had three signal boxes, all opened in 1900. The principal box was the South box, located on the east side at the south end of the station at the junction between the Boat of Garten and Elgin East routes and the turn out for the goods yard. This box above the west bank of the River Fiddich with a large stone base. The line crossed over the Fiddich just to the south by a girder bridge.

The West box was at the west end of the Boat of Garten platform. It was built on the timber extension of the platform to the west.

The North box was on the southbound of the Elgin East platforms, just north of the waiting shelter.

The Boat of Garten route closed to passengers in 1965, but remained open to goods.

The main line, the ^Glen^ route, from Elgin East to Keith closed to passengers in 1968. It closed completely between Elgin East and Craigellachie. All three signal boxes closed. Also in 1968 Boat of Garten to Aberlour closed.

Aberlour to Dufftown via Craigellachie closed in 1971. 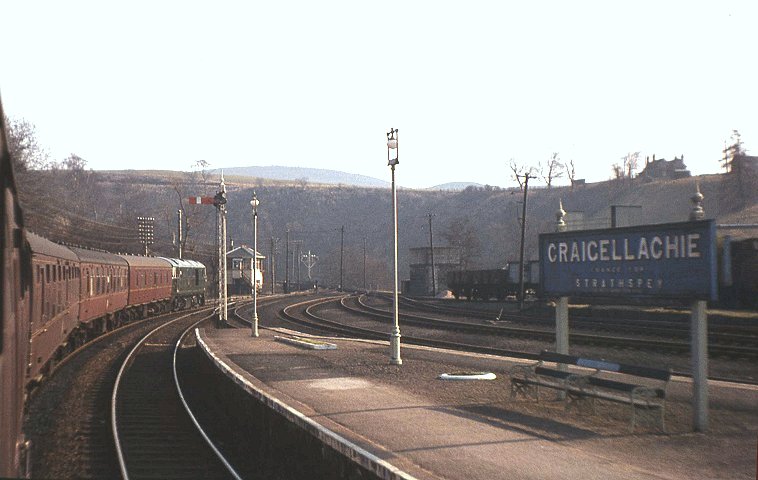