This railway is still open. It is served by passenger trains between Ayr to Girvan and other services from Glasgow to Stranraer and (formerly) Newcastle to Stranraer operated by ScotRail. At the time of writing (2002) there are no regular freight services. 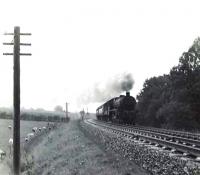 A Glasgow St Enoch - Stranraer express photographed passing Nether Culzean north of Maybole on Saturday 17 October 1959. At the head of the train is ...
G H Robin collection by courtesy of the Mitchell Library, Glasgow 17/10/1959

A Stranraer - Glasgow express about to run through Maybole Junction on 17 October 1959, hauled by an unidentified Black 5. ...
G H Robin collection by courtesy of the Mitchell Library, Glasgow 17/10/1959 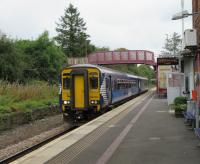 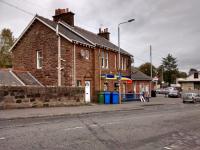 The street aspect of the station building at Maybole looks a good deal more
...
David Panton 10/10/2017 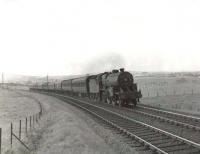 This short lived station was around a mile and a half west of Crosshill itself.
...

Kilkerran was a double platform station with the main two storey station building on the southbound platform.
... 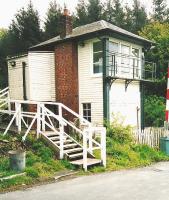 Lever frame in Kilkerran signalbox. This is a fringe box for the Ayr signalling scheme and close by this lever frame is a computer connected to Ayr ...
Ewan Crawford //1989 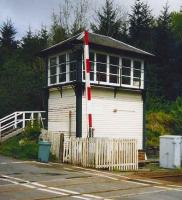 This was a two platform station. The main station building was on the southbound platform. The building, Glasgow and South Western Railway in style, bore a strong resemblance to the now gone building on the northbound platform at Maybole.. There was a goods yard to the east, on the south side of the line, served from the west. The platforms crossed the main road to the south of the ...

Corkerhill Black 5 45007 photographed near Bargany, Ayrshire, on the approach to Dailly on 15 August 1959 with a train from Girvan for Glasgow St ...
G H Robin collection by courtesy of the Mitchell Library, Glasgow 15/08/1959

This was a two platform station crossed by a road bridge. The main station building was on the southbound platform. The building had an unusual largely glazed extension at the south end of the building, perhaps the waiting room for Killochan Castle. The building was replaced around 1900.
...

This was a two platform station built during World War Two to serve the temporary ICI munitions factory built at Grangeston Distillery.
...

This signal box controlled the junction for the Maidens and Dunure Railway (1906) where it met the Maybole and Girvan Railway (1860).
...

At this junction the Girvan and Portpatrick Junction Railway (1877) met the Maybole and Girvan Railway (1860).
...

A 101 runs north past Girvan Junction. The train is approaching from Girvan (New) station on the line to Stranraer. The original terminus was to the ...
Ewan Crawford //

Looking south at Girvan Junction. The line in the distance to the right ran to the original Girvan terminus. ...
Ewan Crawford 19/03/1988
3 of 3 images.

This was a single platform station which officially closed as a goods only yard in 1989 partly due to the condition of the single track bridge over the Water of Girvan.
...

Site of the bridge which carried the line into the original Girvan station. ...
William Tollan 09/02/2006