This line is open to passenger traffic and goods traffic. It runs from Lesmahagow Junction by Motherwell (New) station to Braidhurst (to the south of Mossend) it joins the original route through Motherwell. The course of the original route has now largely disappeared save for an abandoned viaducts piers and some hints of track formation.

Looking south at Mossend South Junction. The former Clydesdale Steelworks are on the left. ...
Ewan Crawford //

View over Milnwood / Mossend South Junction with lines diverging to Holytown, Coatbridge Central and Bellshill. In the background is British Steel ...
Bill Roberton 01/05/1991

Aerial view of the junctions to the south of Mossend Yard looking west. Note the Freightliner on the north to east curve. ...
Ewan Crawford //
3 of 3 images.

This junction was south of Milnwood Junction. Most recently (1993) it provided access to the line to Ravenscraig No 3 Yard used for trips from Mossend Marshalling Yard to deliver limestone to the works and take strip coil away. It had also served the sizeable Clydesdale Steel Works yard, which closed slightly earlier.
...

View looking west to the Braidhurst Viaduct on the Motherwell Deviation. The deviation runs from Jerviston Junction (New) south to Lesmahagow Junction ...
Ewan Crawford 10/05/2008
1 of 1 images.

This is at the north end of the former Motherwell MPD. The former shed is on the west side of the line. The Braidburst Loops are on either side of the line between here and Lesmahagow Junction. To the north is the Braidhurst Viaduct.
...

This is a double ended shed with ten roads located to the west of the Motherwell Deviation Line and just north of Lesmahagow Junction. Approach is from the north and south.
... 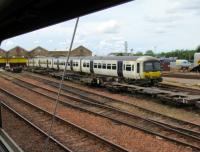 The word ^grabshot^ seems to be an excuse for a rubbish photograph so here is a grabshot of a resting Class 365 at the former Motherwell depot. Seen ...
David Panton 22/06/2019 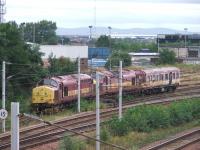 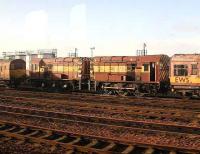 This structural works was located in Motherwell on the east side of the Motherwell Deviation Line (Caledonian Railway) just north of Lesmahagow Junction (and opposite [[Motherwell Shed).
...

This is a junction just north of Motherwell station.
...

View across Lesmahagow Junction with a ballast train in the foreground reversing into the Findlay sidings. In the background is 37140 with a permanent ...
Ewan Crawford //1988

A dull and overcast Autumn day in Motherwell in 1970, contributed to in no small way by a pair of Claytons struggling past with a freight. Lead ...
John Furnevel 30/10/1970
4 of 7 images. more