This line is open. The station at Largs, which was demolished by a run-away train, has been re-built.

Many services ran to Ardrossan Town station, but with the north to west link at Ardrossan no longer in existence these trains now run through to Glasgow.

At Castlehill Junction, immediately east of Ardrossan Town, the Ardrossan and Johnstone Railway was met by the west fork of the Largs Branch (Glasgow and South Western Railway). The box was located to the north of the junction and opened with the Largs branch in 1878.
...

Castlehill Junction with the route left to Largs now somewhat overgrown. Also ahead was the second G&SW Ardrossan shed, somewhere in those trees. ...
Ewan Crawford 10/08/2017 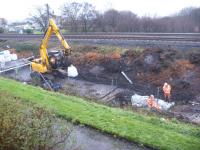 QTS getting near the end of embankment stabilisation work for Network Rail to the north of Ardrossan. Improved drainage and webbing have been ...
Douglas Blades 20/11/2017

These sidings served a Second World War oil depot with partly buried oil storage tanks alongside the Largs branch in countryside not far to the north of Ardrossan. The oil was manufactured at the nearby Ardrossan Refinery and puimped to the site.
...

A train on the Ayrshire coast line heading north away from Ardrossan in 1962. ...
R Sillitto/A Renfrew Collection (Courtesy Bruce McCartney) //1962

Ardrossan's Black 5 no 45479 approaching the town from the north in early July 1962. The train is passing the site of the former Montfode fuel depot, ...
R Sillitto/A Renfrew Collection (Courtesy Bruce McCartney) 03/07/1962
3 of 3 images.

This signal box was located between West Kilbride (to the north) and Ardrossan (Parkhouse Junction). The box was on the east side of the line a short way south of the Kirkland Glen Viaduct. The box opened in 1896, there may have been a temporary box just prior to this (although this is not shown on the 1896 OS map).
...

A Largs - St Enoch express photographed near the site of Boydston signal box on 24 May 1960. The locomotive is Ardrossan based Fairburn 2-6-4T no ...
G H Robin collection by courtesy of the Mitchell Library, Glasgow 24/05/1960

The Largs branch is a confusing line - a southbound train going away from the camera heads for the Kirkland Glen Viaduct. Ardrossan Harbour is seen in ...
Ewan Crawford //1990
1 of 1 images.

This is a single platform station. There are, however, two lines. The line nearest the platform is used in both directions by Glasgow Central - Largs trains. The same line was used by freight going north to the Hunterston Ore Terminal. The other line was used by southbound trains coming from Hunterston only.
...

334034 passes the Low Level line at Hunterston Junction with a service for Largs. Image taken with authorised access to this point in 2003. ...
Bill Roberton //2003

This is a single platform station with a car park in the south of the village of Fairlie. From 1880 to 1882 it was the terminus of the line before it was extended to Fairlie Pier.
...

Fairlie, once Fairlie High, showing the building on the one time northbound platform. The goods yard to the right dealt with nuclear flask traffic ...
Ewan Crawford //1987

This was the junction between the 1882 line to Fairlie Pier and the 1885 extension to Largs. Fairlie Pier was a steamer pier and Largs was in the town of Largs.
...

A Sunday St Enoch - Largs train emerges from Fairlie Tunnel and runs through the junction on 5 July 1959, hauled by Corkerhill Fairburn tank 42191. ...
G H Robin collection by courtesy of the Mitchell Library, Glasgow 05/07/1959

A Sunday Largs - Glasgow service about to run through Fairlie Pier Junction on 5 July 1959. The train is hauled by Ardrossan shed's Fairburn 2-6-4T no ...
G H Robin collection by courtesy of the Mitchell Library, Glasgow 05/07/1959

This station, on a steamer pier, was the terminus of a short double track branch from Fairlie Pier Junction.
...

The pier that eclipsed all the others ... for bulk mineral importing. Fairlie Pier looking to Hunterston Pier. Mountains of Arran beyond. ...
Ewan Crawford //1987

This was Fairlie Pier. Looking from the end of the platform towards the pier. Note the Admiralty pier on the right. ...
Ewan Crawford //1987

From the site of the buffers looking east at Fairlie Pier. The lines ran off to the right behind the row of houses to meet the Largs Branch. ...
Ewan Crawford //1987
4 of 17 images. more

This is a two platform terminus station which, just to the south, continues as a single track to Fairlie. There is a small, modern, glazed station building on the east side. The station opened in 1885, with the extension of the line north from Fairlie Pier Junction.
... 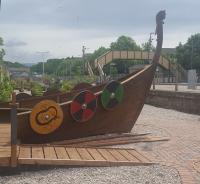 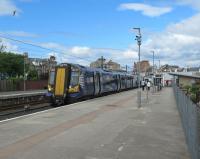 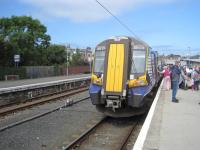 This junction is immediately west of Ardrossan South Beach station. The lines from Glasgow to Ardrossan Harbour and Largs divide here.
... 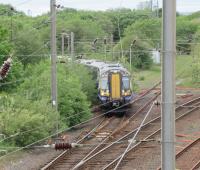 380108 takes the Ardrossan Harbour line at Holm Junction. Ahead is the turnback siding and to the right the Largs branch. ...
Ewan Crawford 10/08/2017

End of the line. Ex-Caledonian 0-6-0 no 57673 stands at the south east corner of Ardrossan shed yard in the early part of 1962, around the time of its ...
R Sillitto/A Renfrew Collection (Courtesy Bruce McCartney) //1962

QTS getting near the end of embankment stabilisation work for Network Rail to the north of Ardrossan. Improved drainage and webbing have been ...
Douglas Blades 20/11/2017