This railway is closed. It opened in 1884, two years ahead of the Great North of Scotland Railway's equivalent line, not only to provide a service to the town and area but also to capture the considerable fish traffic from Buckie.

The line closed in 1915 as a wartime economy and its track lifted in 1917 for the war effort (at Invergordon Harbour, US Naval Base 17 and US Naval Base 18). Although reinstated it never reopened to passengers, but was used at either end for goods traffic until 1933 (north end) and 1966 (south end).

Passenger services are still provided by ScotRail between Inverness, Keith and Aberdeen.

This is a one platform station, with a second out of use platform on the former route to Dufftown. There is a passing loop to the east of the station, inconvenient when trains are running late.
...

Looking east over Keith goods yard in 1990. The wagons would be used for loads from the Chivas Regal facility, which can be seen in the background.
...
Bill Roberton //1990

The GNSR goods shed at Keith still stands. In the foreground is the Dufftown platform line, the buffer on this line being not far behind the camera. ...
David Prescott 30/01/2018

This signal box was west of the Highland Railway part of Keith station. It controlled the approach to the station and goods yard, to the east, and the junction between the Inverness and Aberdeen Junction Railway, of 1856, and the Buckie and Portessie Branch (Highland Railway), of 1884.
...

This was a two platform station with the main station building on the southbound platform. The station had north and south signal boxes.
...

Looking south at the former Aultmore station viewed from the roadside. ...
Ewan Crawford //

Enzie was a two platform station with a passing loop on a single track line. The main station building was on the northbound platform. It was up a hill and somewhat remote from any sizeable population.
...

Buckie line looking north as it crosses over the hills at Enzie. ...
Ewan Crawford //

This was a single platform station on the east side of the line. The station had a timber platform and waiting shelter.
...

This was a single platform station with a goods yard to the east of the station, served from the north. Rathven itself is to the north east.
...

This station opened in the south of Buckie, on high ground above the town and harbour. It opened in 1884, just ahead of the competing Buckie [GNSR] station of the GNoSR in 1886.
... 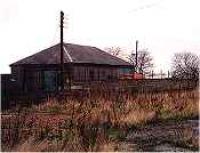 This was a shared station with the Great North of Scotland Railway. The Highland Railway owned the southern face of an island platform, the north face being the westbound line of the GNoSR. The Highland's single track from Buckie [HR] had a loop at the platform and sidings.
...

This was a two road Highlanf Railway locomotive shed at the east end of the comapny's part of the Portessie [HR] and Portessie [GNSR]] station.
...

This was a double track junction to the east of the Portessie [GNSR] and Portessie [HR] station where the lines from their Buckie [GNSR] and Buckie [HR], respectively, met.
...