This light railway is closed. The line ran south from Wick to the terminus at Lybster.

Heavy fish traffic was hoped for, but did not arise.

The nearest passenger services are provided by ScotRail between Wick, Thurso and Inverness.

This is the end of the Far North Line from Inverness, the most distant station from the rest of the network. The furthest north station is Thurso. The station is to the south of the River Wick, in the west of the town. The town has a considerable harbour on Wick Bay, built for the once large fishing fleet.
... 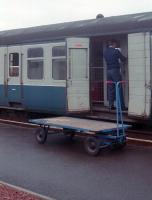 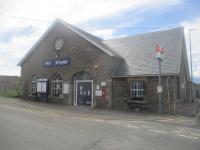 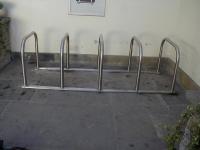 This station stood alongside the A99. The station building backs onto the A road. The platform was on the east side of the line. There was a goods siding to the south, approached by a reversing spur parallel with the platform line.
... 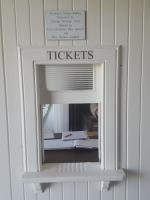 A photograph of the ticket office window at the restored Thrumster Station, which closed in 1944. ...
John Yellowlees 17/08/2017

A plaque was unveiled at Thrumster on the 21st of August to celebrate an award from the National Railway Heritage Awards for the former station^s ...
John Yellowlees 21/08/2018 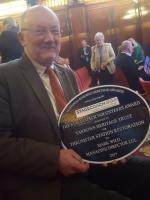 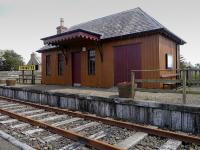 This was a single platform station. The platform was on the east side of the line with a building typical of the line, such as that preserved at Thrumster.
... 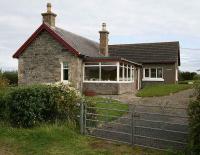 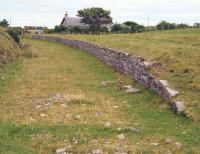 View north along the platform remains at Ulbster on 28 August. The station building stands in the background. ...
John Furnevel 28/8/2007
3 of 3 images.

This was a single platform station. The platform was on the south side of the line. The station building was of the same style as that which survives at Thrumster.
...

Looking east at the former Occumster level crossing. The station was in the distance. ...
Ewan Crawford //

A former crossing keeper^s cottage west of Occumster on 28 August 2007. Much of the surrounding area has now been agriculturally landscaped. ...
John Furnevel 28/8/2007
2 of 2 images.

This was a single road timber shed at the Lybster terminus. The shed was at the east end of the site and on the south side of the railway. It was reached by reversing from the goods shed. The turntable was located in the ^V^ between the railway and shed siding.
...

This was the southern terminus of the single track line from Wick. It was a one platform station with a generously sized goods yard. It was in the northern part of Lybster. Lybster Harbour was once a busy fishing port established by the British Fisheries Society but suffered with the collapse of over-fishing of herring around 1900.
...

Lybster goods shed in 1998 looking to the buffers. This building has been demolished but the terminus, now a golf club building, remains - this is out ...
Ewan Crawford //1998

Approaching the Lybster terminus of the Wick and Lybster Light Railway on 28 August. The former station building still stands along with partial ...
John Furnevel 28/8/2007

View north towards Wick from the former Lybster station on 28 August 2007 where the old station building has been put to good use as the clubhouse of ...
John Furnevel 28/8/2007
4 of 6 images. more