This single track line is closed, except for a short section near Dalmeny, south of the station.

This junction was east of Ratho station (on the 1842 Edinburgh and Glasgow Railway) and Ratho (Low Level) (on the 1866 South Queensferry Branch (North British Railway)), formed with the branch opened.
...

This was a single platform station on the South Queensferry Branch (North British Railway) immediately north of Ratho on the Edinburgh and Glasgow Railway. The junction between the main line and its branch was just to the east at Queensferry Junction.
... 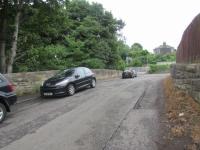 Bridge over the former Queensferry line at Ratho. The vew looks north from the former Low Level station to the High Level on the E&G. ...
John Yellowlees 30/07/2018
1 of 1 images.

To the south of Kirkliston station the line passed over the River Almond. Although built as a double track viaduct it only carried the south end of the loop.
...

The trackbed of the South Queensferry branch looking south shortly after crossing the River Almond on the afternoon of 13 January 2012. The line ...
John Furnevel 13/01/2012

Old railway bridge crossing the River Almond approaching Kirkliston, on the former branch between Ratho and Dalmeny. View is north towards the village ...
John Furnevel 13/01/2012

Alongside the River Almond at Kirkliston under a low winter sun in January 2012. View south east, with the village off picture to the left and the ...
John Furnevel 13/01/2012
3 of 3 images.

Site of the former distillery yard at Kirkliston photographed in April 1995. Note the surviving yard lamp. ...
David Panton /04/1995
1 of 1 images. 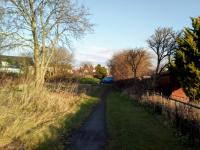 The site of Kirkliston station has been built over, but thanks(?) to the blue van on the former level crossing that^s not too obvious in this 17 ...
David Panton 17/12/2019

Looking over the remains of the level crossing towards the former Kirkliston station following tracklifting. The station closed to passengers as long ...
Frank Spaven Collection (Courtesy David Spaven) //
2 of 2 images. 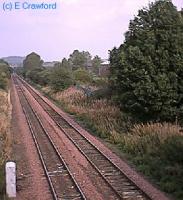 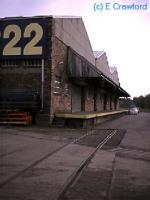 A photograph taken on the BLS ^Forth Fife Railtour^ of 28 August 1976 showing the buffer stop on the truncated Kirkliston branch,
...
Bill Roberton 28/08/1976

This was a four way junction. The 1868 was crossed by the 1890 Forth Bridge Connecting Lines (North British Railway) which joined the line from south east and left the older line to the north west of the junction.
... 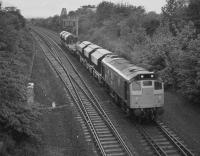 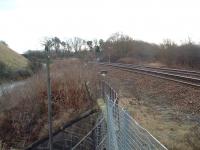 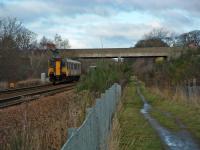 View north from the site of Dalmeny^s first station. This became a goods yard on the opening of the Forth Bridge, the line to which is seen to the ...
Ewan Crawford 28/12/2003
1 of 1 images. 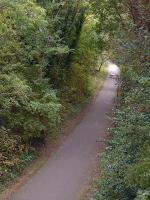 This was a single platform minor station. The timber platform was on the north side of the line. There was a waiting shelter at the west end of the platform and also at the west end the signal for the line to Port Edgar and the goods yard, formerly the terminus of the line, South Queensferry [1st]. There was a siding to the east. This station replaced the terminus. It closed with the ...