Leven and East of Fife Railway

This line closed in 1966. It was formed by the merger of the Leven Railway with the East of Fife Railway in 1861, forming a line reaching from Thornton Junction to Kilconquhar.

It was extended east to Anstruther [1st] in 1863. The line became part of the Fife Coast Line in 1883 when the Anstruther and St Andrews Railway joined railways in the north and south of the east of Fife.

A single track but scenic line, popular with tourists, it is missed.

This station was built to a design commonly used on this line. A loop, with a passenger platform on one side (north) and a loading bank (south) which was an island served on both sides. A siding to the south was served from the east. Unlike most of the other stations it was not altered from this. There was a level crossing at the west end.
...

View east along the single platform at Kilconquhar looking towards Elie in 1996. Opened by the East of Fife Railway in 1857 this was the terminus of ...
Ewan Crawford //1996

The charmingly pronounced ('Kinyucher') Kilconquhar station seen from a train shortly before 6 September 1964, the date of the withdrawal of passenger ...
Frank Spaven Collection (Courtesy David Spaven) /09/1964
3 of 3 images.

This station is closed. This was originally a single platform station with a loop. To the north of the loop was the passenger platform and to the south a loading bank, which was an island with a track down either side. To the south again was a siding, approached from the east.
...

Elie station in 1967, taken after track-lifting. I placed the sign to make it show. How I wish I had kept that sign but it would never have fitted ...
Jim Scott //1967 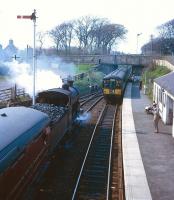 This was a two platform station with a loop. The main station building was on the eastbound platform.
... 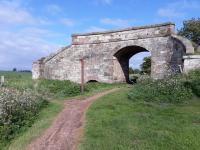 Evidence of the Fife coastal route along the Forth is sparse where agriculture has reclaimed the trackbed in many places. This is evident just west ...
Malcolm Chattwood 19/05/2019 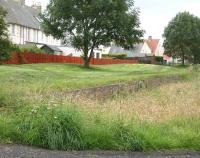 Part of an old loading bank that once stood alongside St Monance station on the Fife coast, photographed looking south west towards Elie in 2007. The ...
John Furnevel 01/07/2007

Platform view at St Monance station in the East Neuk of Fife as passengers leave an eastbound train. The photograph was taken a short time before ...
Frank Spaven Collection (Courtesy David Spaven) //1965

This was a two platform station on a single track line. There was a goods yard to the south - a siding looped from the line served the second face of the westbound platform and there was a siding from this, served from the east. The centre of Pittenweem itself is under half a mile to the south of the former station.
...

The former station building at Pittenweem viewed from the bridge. The view looks east. ...
Brian Adam //2016

This was the junction between the Leven and East of Fife Railway of 1863 and the Anstruther and St Andrews Railway of 1883, both single track lines. With the extension the original Anstruther [1st] station became a goods yard on a short branch, replaced by Anstruther [2nd] which was to the north and a little further east. The signal box was on the north side of the junction.
...

Looking east from the bridge at Anstruther Junction in 2015 towards the sites of the two stations. Straight ahead then slightly left for New, to the ...
Colin Miller 14/06/2015
1 of 1 images.

This was the terminus of the Leven and East of Fife Railway in Anstruther Wester. After extension of the line to St Andrews [2nd] it became a goods only station, replaced by Anstruther [2nd] just to the north. The original line and new line met at Anstruther Junction, just to the west.
...