This line is closed. The railway ran 24 miles from Spean Bridge on the West Highland Railway to Fort Augustus. For much of its length it followed the Great Glen.

It was conceived as being the first part of a new route to Inverness from the south. Construction was expensive and it was built to a high standard with fine castellated viaducts and large stations. Like the Mallaig line concrete was used in its construction. The first sod was cut in 1897.

The line had a very chequered early history, for a time making more money closed than open, before becoming a branch of the West Highland Railway until closing after the Second World War.

Despite the long closure much of the route remains obvious and much of the trackbed is walkable and carries an official walking route, the Great Glen Way .

The Invergarry & Fort Augustus Railway, carved out of the mountain slopes, will be there until the rocks melt with the sun.

This was a 24 mile railway running from Spean Bridge, on the West Highland Railway, to Fort Augustus at the south end of Loch Long.

Leaving Spean Bridge the line turned from west to north west dropping slightly to cross the River Spean by the Spean Viaduct [IFA]. It then ran on a shelf above the east bank of the river passing General Wade^s High Bridge. The modern day road north took a different route north, climbing hard on the western slopes of Coire Ceirsle Hill, passing the Commando Monument.

After passing the station the line turned away from the Spean to enter Glen Albyn, the Great Glen, running above the east side of the south end of Loch Lochy, with distant view of Achnacarry House off to the west, before turning inland to meet the road north, cross it and then run parallel in a cramped gully to reach the Gloy Viaduct.

From the Gloy Viaduct the line continued to Invergloy Platform, far above Invergloy House which is to the west on the east bank of Loch Lochy.

The line continued above the loch, with the road slowly dropping down to its shore and the line reaching its summit at Letterfinlay Crossing, a passing place which never opened. Letterfinlay Lodge Hotel is below and above, so the south east, is the summit of Leitir Fhionlaigh. Across the loch are views of Meall na Teanga and Sron a Choire Chairbh.

The line progressively lost height, passing a little to the east of the Laggan Locks at the north end of Loch Lochy.

Invergarry station was next which served, distantly, the village of the same name and Invergarry House. Much more distantly it served Glenquoich Lodge, seat of Lord Burton who was the driving force behind the railway^s development.

After Invergarry, a the south end of Loch Oich, the road north takes to the west side of the loch and the railway and General Wade^s road continue north up the east side. Around half way up the loch Invergarry House can be seen on the west side.

At the north end of the loch the railway passed through the Loch Oich Tunnel and shortly afterwards crossed the Calder Burn Viaduct before passing Abercalder Lodge, off to the east.

From Abercalder station the line was largely level, running parallel with the road north into Fort Augustus, on the west side of the village and south of the Caledonian Canal.

A short line extended north from Fort Augustus, crossing the Caledonian Canal by means of Fort Augustus Swing Bridge west of a ladder of locks and quickly followed by crossing the River Oich by the Oich Viaduct. The line then swung east with a view of the Fort Augustus Abbey to the south and past Battery Rock, to the north, to reach the west shore of Loch Ness at its southern end.

Fort Augustus Pier station was reached shortly afterwards terminating next to a steamer pier on the west side of the loch. Inverness is around 30 miles distant, to the north. Steamers traversing the Caledonian Canal between Fort William and Inverness could be used to continue the journey north.

This is a two platform station with a passing loop. The main station building on the eastbound platform (for the south), altered at the road side, remains standing. There is a disused signal box (^C^ listed) dating from 1949.
...

Spean Bridge station seen from above, just to the south of the station. On the left is the I&FAR building and on the right the WHR building (only the ...
Ewan Crawford Collection // 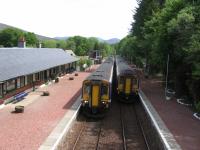 Period platform furniture at Spean Bridge in 1977. The bus service is a reminder of the branch to Fort Augustus, the Invergarry and Fort Augustus ...
Bill Roberton //1977

A celebration of the 100 years of the West Highland Railway seen at Spean Bridge in 2001. It wouldn^t be visible to passengers, but hopefully the ...
Ewan Crawford //2001
4 of 29 images. more

This was a girder viaduct over the River Spean close to the junction at Spean Bridge station.
...

This is the southern abutment of the I&FA^s bridge over the River Spean. It is roughly half way between the present road bridge over the Spean, at ...
Ewan Crawford 21/09/2008
2 of 2 images.

This was an island platform station with a building typical of the line. There was a signal box to the south of the station building and a generous goods yard, (four sidings, and loading banks for animals and goods), laid out on the east side. Access to the platform was by a ramp from a road overbridge.
...

Site of the former Gairlochy station looking south east towards Spean Bridge on a grey and wet September day in 2005. The railway line has given way ...
John Furnevel 28/09/2005

View south east along the trackbed of the Fort Augustus branch approaching Gairlochy in 2009, looking towards the surviving abutment of the former ...
John Furnevel 28/09/2005

This viaduct crossed the River Gloy between Invergloy Platform and Gairlochy. To the south the railway ran on a shelf between the road north, to the west, and river.
...

Looking north towards the Gloy Viaduct along the former trackbed of the Invergarry and Fort Augustus Railway taken from the parallel A road. The line ...
Ewan Crawford //1996
1 of 1 images.

Looking north at the site of Invergloy platform. ...
Ewan Crawford //
1 of 1 images. 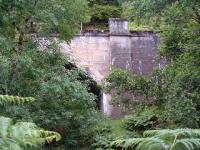 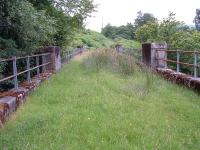 Top view of bridge near Altrua. The trackbed further west is virtually impassable due to the rhododendrons, 28/07/05. ...
John Gray //

The solum of the Fort Augustus branch high above Loch Lochy in Summer 1966. The weekly coal train, which continued after passenger closure in 1933, ...
Frank Spaven Collection (Courtesy David Spaven) //1966
3 of 3 images.

This passing loop was high above the east bank of Loch Lochy, above Letterfinlay Lodge.
...

A concrete bridge seen high above Letterfinlay crossing over the Allt na Leitire. This was taken at the waterfall half way up the hillside from the ...
Ewan Crawford //1996

Looking north at the site of Letterfinlay passing loop. ...
Ewan Crawford //
2 of 2 images.

This was an island platform station with a building similar to those on the West Highland Railway. The building^s canopy on the west side extended over the down loop, due to the proximity of Invergarry House. The portion over the loop was cut back in later years. The signal box was north of the station building. Invergarry station was 15 miles from the junction with the [[West Highland ...

A closer view of the locomotive at Invergarry taken during a Heritage Railway Association visit. ...
John Yellowlees 02/04/2017

The information board seen on a Heritage Railway Association visit today to Invergarry. ...
John Yellowlees 02/04/2017 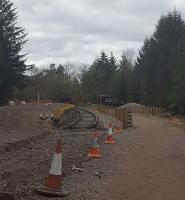 Heritage Railway Association visit to Invergarry: view of the station from the Fort Augustus end. ...
John Yellowlees 02/04/2017
4 of 26 images. more

This is a disused single track tunnel 201 ft long on the east side of Loch Oich. It is located to the south of Aberchalder.
... 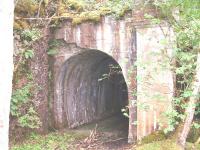 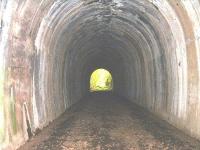 This is a girder viaduct crossing the Calder Burn close to where it enters the north end of Loch Oich.
... 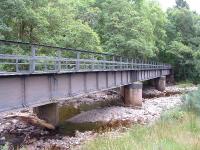 This was a one platform station on the east side of a loop. The loop was un-signalled and was for goods use. There was a siding on the west side, approached from the south. The station building was typical of the line, similar to those on the Mallaig Extension (West Highland Railway).
... 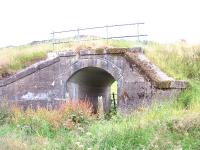 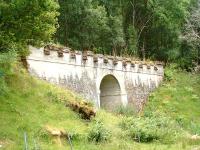 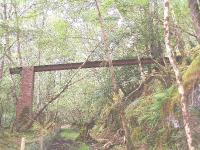 An aqueduct for diverting water away from the line. There are two of these. The state of the trackbed can also be seen. ...
John Gray // 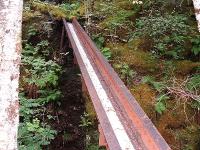 View of the former RNAD depot, and its platform, at Fort Augustus. This was just south of the station on the east side of the line. This view looks ...
Ewan Crawford //2000
1 of 1 images.

This was a three platform station. There was a through platform for the line to Fort Augustus Pier and two bay platforms. The platforms were in concrete, as were many structures of this line. The station building was reminiscent of the West Highland style, but at ninety degrees to the line.
... 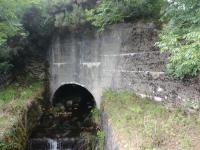 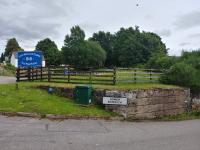 This is where the old line crosses the main road out of Fort Augustus down to the pier on Loch Ness. If only the line had been built linking Fort ...
Alan Cormack 17/07/2017
4 of 10 images. more

This was a single track hand operated swing bridge immediately north of Fort Augustus station and its through platform on the west side of the station. The bridge pivoted at the south end.
...

During maintenance of the Caledonian Canal locks in 1996 it was possible to see the detail of the pier which once supported the swing bridge for the ...
Ewan Crawford //1996

Looking east towards Fort Augustus station where the Caledonian Canal was crossed via a swing bridge by the Fort Augustus Pier branch. The canal is ...
Ewan Crawford //
2 of 2 images.

This was a single track lattice girder bridge with four spans and castellated piers. The line^s engineers were Forman and McColl and the resident engineer was William Roberts, later of the Highland Railway.
... 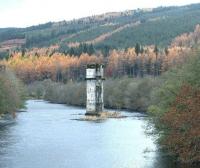 One of the surviving piers from the Oich viaduct at Fort Augustus rising Excalibur - like (sorry about that) from the river in November 2002. ...
John Furnevel 02/11/2002 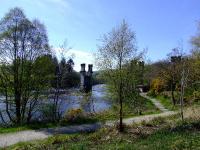 The support columns of the viaduct that carried the railway over the River Oich to the pier on Loch Ness. ...
John Gray 29/04/2007
4 of 5 images. more

This station was north of Fort Augustus station on the west side of Loch Ness.
... 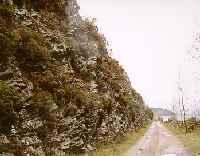 The Fort Augustus Pier station and pier viewed across Loch Ness from the slopes of the Borlum Hill. This station closed in 1906. It rejoiced in a sign ...
Ewan Crawford 21/09/2008
3 of 3 images.