This line is closed. The line is also known as the Dundee and Forfar Direct Line and was opened by the Caledonian Railway in 1870.

A railway between Dundee East and Forfar [2nd], via Arbroath and Guthrie, already existed but the route was considerably longer than the new line. The route taken had a low population but passed through good farmed countryside. The chief engineering feature was the Dighty Water Viaduct, near Broughty Ferry, which still stands. Due to the constraints of the site at its southern end the line flew over the coastal main line before meeting it at a junction in the east of Broughty Ferry.

It was closed to passengers in 1955 and severed at Forfar in 1958 to become a long goods and minerals only branch from Broughty Ferry. The line closed in 1967.

Much of the route is ploughed out. 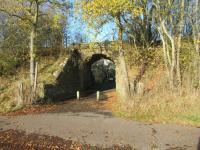 The Forfar direct line left the Dundee & Arbroath on the 'wrong', southern side and climbed before swinging over it at Barnhill [Angus]. This was ...
David Panton 13/11/2019

View west along the D&A towards Broughty Junction in 1996. The abutments supported the bridge that, until 1967, carried the Caledonian direct line to ...
Ewan Crawford //1996
2 of 2 images.

This was a single platform station, the first north from Broughty Ferry on the direct line to Forfar [2nd].
...

A view south from the road bridge at the north end of Barnhill station. Unfortunately the station site was obliterated after closure, but at least ...
Ewan Crawford //1996
1 of 1 images.

This is a disused single track seven arch viaduct in the north east of Broughty Ferry. A listed. It carried the direct line from Broughty Ferry to Forfar North Junction. (Also known as the Balmossie Viaduct.) The viaduct is 393 ft long overall and 78 ft high.
...

This was a two platform station with a passing loop. The main station building was on the northbound platform.
...

Side view of the former station building at Kingennie in 1996. The platform was on the other side. This view is no longer possible as houses have been ...
Ewan Crawford //1996
1 of 1 images.

This was a timber halt built beside Gagie Goods Station.
...

This quarry branch was served from a loop on the single track line. There were several sidings internal to the quarry.
...

This was a single platform station, with the platform on the south side of the line. The station opened in 1872, two years after the line.
...

This was a two platform station with a passing loop on a single track railway. The station house was on the northbound platform and there was a waiting room on each platform.
...

The view south over the loading bank to Kirkbuddo station, now a house. The line was to the left with loading bank siding centre. ...
Ewan Crawford //1996
1 of 1 images.

This was a single platform station to the north of a road overbridge and located in a deep cutting. The platform was on the east side of the line.
...

View north east at Forfar North Junction in 1996. The main line north to Aberdeen runs ahead and the infilled cutting of the line to Broughty Ferry is ...
Ewan Crawford //1996
4 of 7 images. more