This branch was initially private. It served the Co-op complex at Shieldhall.

The branch was disused in 1895 before opening of Glasgow and Renfrew District Railway, Shieldhall Goods and the King George V Dock.

The branch is now closed, except for a short section between Cardonald Junction and Shieldhall Junction used for access to Deanside Transit. This portion currently (2019) sees no traffic.

This single lead junction is just west of Cardonald station. Its most recent purpose was to reach Deanside Transit.
...

'Jumbo' 57360 comes off the Shieldhall branch at Cardonald Junction with an eastbound freight in the summer of 1959.
See
G H Robin collection by courtesy of the Mitchell Library, Glasgow 09/06/1959

View east at Cardonald Junction showing the cross-over from the centre track to the eastbound track for access to the Deanside Branch. ...
Ewan Crawford 27/11/2011 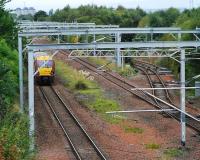 An Ayr service heads west at Cardonald Junction. The junction has not yet been re-laid for the third track but the overhead line equipment is a ...
Ewan Crawford 26/09/2009
4 of 7 images. more

This was a three way junction approached from Cardonald Junction to the south.
...

These saw mills were at the south end of the Co-op complex at Shieldhall, close to Shieldhall Junction and served by a siding off the Shieldhall Goods branch.
...

43657 awaits cutting at Shieldhall scrapyard. See lighting tower in factory behind which could be seen from trains between Paisley and Glasgow. The 3F ...
Bill Hamilton /06/1963
1 of 1 images.

This former goods yard site is on the west side of the Queen Elizabeth University Hospital. With little difficulty the branch could be re-opened as a passenger line from Cardonald Junction to serve the hospital. The trackbed is intact including the M8 closing the trackbed by bridge.
...

Under all the undergrowth the Shieldhall Goods Branch was still in place in 1987. This branch served several goods yards and the Alexander Stephens ...
Ewan Crawford 19/05/1987
1 of 1 images.

Via a connection to the tram network on Renfrew Road at Shieldhall Goods the tramway was used east to Linthouse Shipyard.

This was the shipyard of Alexander Stephens and Sons. It was west of the Fairfield Shipyard. ...