This railway is open. It is an electrified single track line passenger which runs from Drem, on the East Coast Main Line, to North Berwick on the coast. Trains are from Edinburgh Waverley, to the west.

This junction is immediately east of Drem station. Between the station and the junction the line has four lines, ie there are slow lines on either side of the mainline to allow fast trains to overtake slow trains.
... 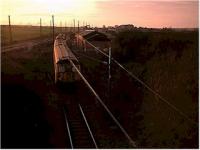 Train comes out of the sunset at Drem Junction heading for North Berwick. ...
Ewan Crawford // 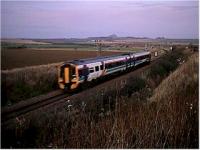 This was a single platform station between Drem and North Berwick stations. The platform was on the east side of the line. The original small station building was later replaced with a larger building, a small version of the typical North British Railway style building. A railway cottage was just to the east, on the station approach.
...

Looking north to the former Dirleton station in 1986. A small goods yard was to the right, along with the surviving station house.
...
Bill Roberton //1986

Locomotive hauled train passing Dirleton and heading south. The sea is in the distance. ...
Ewan Crawford //

This was the short lived terminus of the North Berwick branch allowing the line to open before the line was extended into the terminus. The approach to the permanent station was made via a cutting which was time consuming and expensive to built.
...

North Berwick station North Berwick [1st] was cut back closer to the junction in the 1980s after demolition of the station buildings.
... 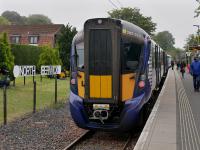 This was a two platform terminus with substantial station buildings on both platforms. The station frontage had a considerable awning. There was a goods yard on the south side if the passenger station and locomotive shed at the west end on the north side of the line. Opposite this was the signal box, closed in 1968.
...