This railway is closed.

The North British Railway took over the promotion of this railway, which had various names over the years, including the Innerleithan and Peebles Railway, as local promoters were having difficulty pushing it through. The North British were able to offer the Caledonian Railway, who blocked the proposed line, favourable rates for traffic and made a connection to the Symington, Biggar and Broughton Extension Railway in Peebles.

This engine shed was provided just to the north of the original terminal station. It was originally accessed from the terminus but on extension of the line east to Galashiels was re-aligned to be approached from the north. ...

Looking south at the approximate site of Peebles Engine Shed where the extension east to Galashiels left the original Peebles station on a short spur. ...
Ewan Crawford //
1 of 1 images.

This was a single platform station with a canopy provided when the line was extended east from Peebles to Galashiels. The station replaced Peebles [1st]. ...

This junction was by the signal box just south east of the second North British Railway Peebles station. The link to Peebles [CR] crossed the goods loop on its course south and then west. The junction was alternatively called Peebles Caledonian Junction.
... 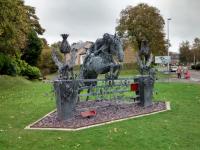 This fine scuplture, cleverly made out of straightened-out horse shoes, commemorates a local lad. It is also nicely positioned in what was the vee of ...
David Panton 19/10/2017

Old preserved overbridge crossing the trackbed of the line heading east out of Peebles towards Galashiels. The route now provides access to 'The ...
John Furnevel 21/05/2010 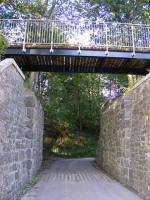 A replacement deck is now in place on the former railway bridge at Eshiels, just to the east of Peebles. Part of the new cycle route between Peebles ...
Colin Harkins 17/07/2010 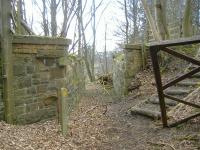 This goods yard was the the south east of Peebles [NB] station, the second North British Railway station in the town. The yard was served by a loop off the line. It was crossed, on the level, by a line from Peebles Junction to Peebles CR and NBR Junction just east of the Caledonian station.
... 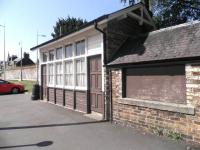 The trackbed of the former NB line turning east out of Peebles towards Galashiels, shortltly after leaving the station. Photographed in January 2005. ...
John Furnevel 20/01/2005
4 of 7 images. more

This gasworks was located at Eshiels near Eshiels Tunnel to the east of Peebles. A siding, approached from the Galashiels direction, ran to the works. ...

Remains of a former railway bridge that once carried the Peebles - Galashiels line over a minor road linking the old gas works (now a recycling depot) ...
John Furnevel 08/08/2010 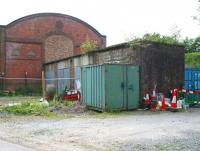 The rear of the coke discharge shed at the former Peebles Gasworks at Eshiels in August 2010. After discharging their load into the shed's coke drops, ...
John Furnevel 08/08/2010

The empty wagon run-out at the rear of the coke discharge shed at Eshiels on 8 August 2010. The photograph is taken looking east from the trackbed of ...
John Furnevel 08/08/2010 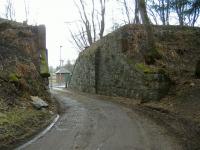 The deck of the railway bridge at Eshiels over the road leading to water treatment works has been removed although the abutments still stand in March ...
Colin Harkins /03/2006
4 of 8 images. more

This is a disused single track five span single track viaduct directly west of the former Cardrona station. It crosses the River Tweed. There is a small flood arch at the east end.
...

Horsbrugh Viaduct at Cardrona. Cardrona was on the Peebles Loop of the North British Railway's line from Eskbank to Galashiels. Opened 1864 and closed ...
John Gray 15/10/2018 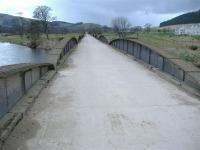 This bridge has now been concreted as part of the Cardrona Golf Complex ...
Colin Harkins /Ma/2006

Background remnants of a stubborn morning mist are still apparent in this view north over the Tweed railway bridge at Cardrona looking toward Peebles ...
John Furnevel 07/10/2005
4 of 11 images. more

This single platform station was at Cardrona Mains, just east of Horsbrugh Viaduct and about a mile north of Cardrona House and Cardrona Viaduct. The former station is now within the modern Cardrona housing estate development. No allowance for line re-opening along the original route has been made.
...

Once-derelict Cardrona station used to stand in isolation when seen from the A72 but is increasingly being crowded out by housing. There is now a ...
David Panton 30/10/2019

The former Cardrona station and signal box after conversion to a village store, seen here in October 2005. ...
John Furnevel 07/10/2005 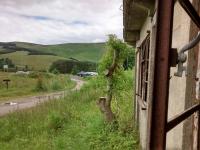 This old platelayers' hut is just a few yards west of the platform at Cardrona, though the station building is obscured by that elder which is trying ...
David Panton 05/07/2016
4 of 18 images. more 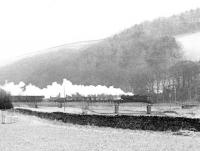 A goods train going east crossing the River Tweed near Cardrona House heading for Innerleithen, thought to have been taken around 1960. The Peebles ...
Dougie Squance (Courtesy Bruce McCartney) //1960

The footbridge that now spans the Tweed between Cardrona and Innerleithen, seen from the trackbed of the Peebles Railway looking towards Galashiels in ...
John Furnevel 18/06/2014 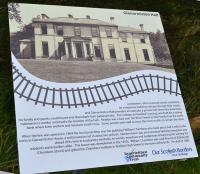 I had a pleasant stroll along the Tweed Valley Railway Path from Cardrona to Innerleithen. The local authority provides information boards which ...
Bill Roberton 15/10/2017
2 of 2 images.

This siding had a loading bank and was approached from the west. The site is just west of the former Innerleithen station.
...

This was a two platform station with a goods yard approached from the east. The yard had a goods shed. There was a level crossing to the west of the station. The platforms were staggered and there was a tall signal box (1895) on the westbound platform.
...

Innerleithen Station with surviving canopy. 15 October 2017. Seeing the expansion of every settlement in the valley and the growth in commuting, would ...
Bill Roberton 15/10/2017 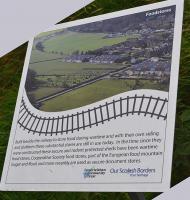 A Tweed Valley Way information board at Innerleithen, this one providing a wealth of detail about the WW2 food store that is still alongside the old ...
Bill Roberton 15/10/2017

Innerleithen station viewed from the former level crossing to its west. ...
Ewan Crawford // 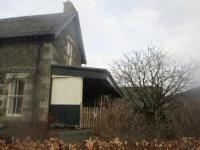 This is a disused six span girder viaduct east of the former Innerleithen station crossing the River Tweed.
...

This was a single platform station on the south bank of the Tweed, connected to Walkerburn by a road bridge. The Tweedholm Mills sat on the low ground on the north bank with the village above.
... 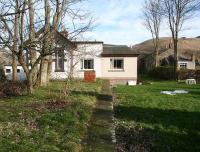 Looking east along the platform at Walkerburn station in February 2007 with the former station masters house to the right. (With thanks to owner Helen ...
John Furnevel 19/02/2007

View north west along the Tweed Valley at Thornielee towards Peebles on 7 October 2005. In the foreground is the former Thornielee station, closed in ...
John Furnevel 07/10/2005

In need of some work but featuring original cast-iron fireplace. A draughty ex lineside hut midway between Thornielee and Clovenfords. View looks ...
Ewan Crawford 17/01/2009
4 of 4 images.

This location was referred to by the North British Railway as
...

An unidentified B1 4-6-0 with an Edinburgh - Galashiels train eastbound on the Peebles loop in the 1950s. The location is thought to be the section ...
Dougie Squance (Courtesy Bruce McCartney) //

View looking west at the former Angling Club Cottage. The platform and waiting shelter were to the left. See image 31487 ...
Ewan Crawford 17/01/2009

This location is now unrecognisable, the bridge having been demolished many years ago and the road realigned over to the left. The location is west of ...
Bill Jamieson Collection //

The view east along the trackbed of the Peebles Railway towards Clovenfords in January 2009. The location is high above the River Tweed in the ...
Ewan Crawford 17/01/2009
4 of 5 images. more

This was a single platform station in the north of the village of Clovenfords. The platform was on the south (village) side of the single line. The single storey station building stood at the west end of the platform. There was a goods shed at the east end, in a small goods yard with two sidings served from a goods loop to the east. A signal box opened in 1899 and closed in 1928.
...

Part of the modified 1866 station at Clovenfords on the Peebles loop. Closed with the line in 1962 the building is now an attractive private ...
John Furnevel 30/10/2006

Undated photograph of the bridge at Caddon Mill, just west of Clovenfords, that carried the Peebles branch over the A72, the third of five crossings ...
Bill Jamieson Collection //
4 of 4 images.

With the mist over the town beginning to lift an Edinburgh bound train heads north out of Galashiels on an autumn morning in 2017. The ScotRail 158 ...
John Furnevel 09/10/2017

The former course of the A72 west of Galashiels in a view looking west in 2009. The Peebles line passed under here, its course now infilled. See image ...
Ewan Crawford 17/01/2009

This junction was by the signal box just south east of the second North British Railway Peebles station. The link to Peebles [CR] crossed the goods loop on its course south and then west. The junction was alternatively called Peebles Caledonian Junction.
...

This fine scuplture, cleverly made out of straightened-out horse shoes, commemorates a local lad. It is also nicely positioned in what was the vee of ...
David Panton 19/10/2017

Old preserved overbridge crossing the trackbed of the line heading east out of Peebles towards Galashiels. The route now provides access to 'The ...
John Furnevel 21/05/2010

A replacement deck is now in place on the former railway bridge at Eshiels, just to the east of Peebles. Part of the new cycle route between Peebles ...
Colin Harkins 17/07/2010

This single track girder viaduct crossed the River Tweed. It was on the short North British owned link between Peebles Junction on the NBR and Peebles [CR].
...

The walkway along the north bank of the Tweed in Peebles in the summer of 2006, showing part of the surviving abutment of the Caley - NB link bridge ...
John Furnevel 26/08/2006 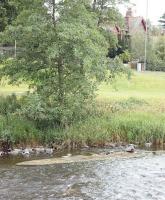 Low water on the Tweed at Peebles reveals the base of one of the piers of the former railway bridge that once carried the link-line from the ...
John Furnevel 26/08/2006

Site of the former crossing point of the Caley/NB link bridge across the Tweed at Peebles in January 2005. Note the surviving part of the bridge ...
John Furnevel 20/01/2005 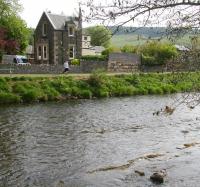 View north across the Tweed at Peebles in May 2010 over the section once spanned by the railway bridge carrying the NB/Caley link line. Part of the ...
John Furnevel 21/05/2010
4 of 4 images.

View north along Tweed Avenue, Peebles, in the spring of 2017 towards the road junction with Walker's Haugh. The embankment and infilled bridge on the ...
John Furnevel 07/04/2017

Brick topped abutment remains standing alongside the walkway on the north side of the Tweed at Peebles in the spring of 2010. The wall now marks the ...
John Furnevel 21/05/2010 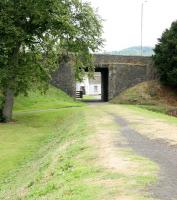