This iron works opened by David Colville and Sons beside the Clydesdale Junction Railway at Crosshill, Motherwell, on lands fued from the Hamiltons of Dalzell.
...

The Dalzell Steel Works was developed alongside the existing Dalzell Malleable Iron Works of 1871, the West Coast Main Line (just south of Motherwell station and close to Motherwell Junction) by David Colville and Sons. The malleable iron works were just to the south and now part of the steel works site.
... 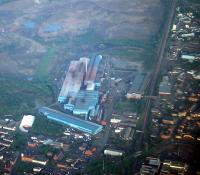 This reconstruction of William Beardmore & Co^s Mossend Iron and Steelworks was due to the demands of Great War and was in part supported by the Ministry of Munitions. The new works was laid out to the west of the existing works and was on a considerably greater scale. Reconstruction was around 1915.
...

This steel works was opened by the Lanarkshire Steel Company Ltd in the 1890s and gradually expanded. The site had an open hearth furnace and rolling mills. It was served by two sets of sidings. From the north were sidings coming from the Motherwell New Lines (Caledonian Railway), built around the same time. That line, before its extension north, was essentially a double track headshunt ...

This was an integrated steel works in the east of Motherwell. It was built by Colvilles Ltd and opened, not fully complete, in 1954. The works closed in 1992. From its inception to its closure it was mired in politics.
... 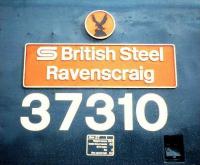 Ravenscraig Steelworks from the north. Ironworks and coke ovens to left, BOS centre and rolling mill right. The land in the foreground was once ...
Ewan Crawford //1987

Aerial shot of the obliterated site of the Ravenscraig Steelworks. ...
Ewan Crawford //
4 of 6 images. more