This was an unusual line, a joint railway operated by the Caledonian Railway (the promoter, as one of the Mid Lanarkshire Lines) and Glasgow and South Western Railway. It linked the G&SWR Darvel branch of 1896 to the CR^s Strathaven Central station. Both Strathaven Central and the Darvel and Strathaven Railway opened in 1904.

The territory was found over by the two companies, resulting in the joint operation as a compromise.

The boundary between the two companies was at County Boundary Junction, between Loudounhill and Drumclog. It was a single track line. Most of the structures were built in concrete.

This line closed in 1939. After several years of use for surplus wagon storage the track was lifted in 1951.

It was well described by G.H. Robin - ^This ten-mile section of line for the most part passed through wild moorland and took in three rural stations.^

This was a fine station. It was an island platform station. The station was to the south of Strathaven. The ticket and parcels office was on Station Road. It was similar to that at Larkhall Central and the remaining building at Hamilton Central. The station was below street level in a shallow cutting. Two bridges from the building crossed the eastbound line to reach the platform - one the ...

Looking west over the site of Strathaven Central station, with the goods shed on the right, in 1986. ...
Bill Roberton //1986

Remains of the island platform at Strathaven. ...
Ewan Crawford //

Strathaven looking to Hamilton. Both the G&SW and Caley had booking offices here. Entry was from bridges from the left. ...
Ewan Crawford //
4 of 6 images. more 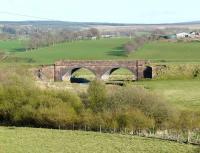 Twin arch bridge adjacent to the hamlet of Caldermill, on the former Caledonian route between Strathaven and Ryeland, Lanarkshire, photographed in ...
Ken Browne 21/04/2009

Remains at Ryeland on the Darvel - Strathaven line looking west in 1996, with mysterious recovery of infill material from the former island platform. ...
Ewan Crawford //1996
2 of 2 images. 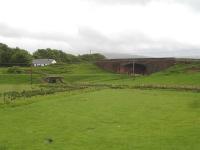 The rail underbridge on the road running NE to Gilmourton from the A71 north of Drumclog, South Lanarkshire, in June 2013. The old bridge was in use ...
David Pesterfield 15/06/2013 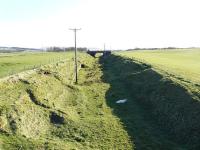 Old railway cutting with evidence of a retaining wall, near Gilmourton, between the former stations of Ryeland and Drumclog, South Lanarkshire. Seen ...
Ken Browne 21/04/2009

A notable skew arch bridge at Gilmourton, near the site of the former Drumclog station in South Lanarkshire, seen in April 2009. Beyond the bridge ...
Ken Browne 21/04/2009
3 of 3 images.

Looking East along the trackbed of the Darvel to Strathaven line, farmer^s occupation bridge in foreground, Loudoun Hill behind. Trackbed condition ...
Robert Blane 23/05/2009

Looking East towards Loudoun Hill and the site of the viaduct that once crossed the valley off picture to the right. There are still sleeper indents ...
Robert Blane 30/01/2010
2 of 2 images.

This was a 13 arch viaduct built to carry two tracks (although only the westbound was ever laid). It was built in mass concrete but faced with attractive blue brick.
...

This is a disused single track three arch viaduct built in blue brick and concrete. It is 162 ft long and 56 ft high.
...

A rather distant view of the isolated railway relic that is the blue brick viaduct over the Glen Water in Darvel. View west in January 2010 from the ...
Robert Blane 30/01/2010
1 of 1 images.