This was a branch of the Caledonian Railway, a light railway from its main line station at Elvanfoot which ran south west to Leadhills, where lead mining was a long established industry, and Wanlockhead, the highest point on any standard gauge railway in Britain.

A northbound First TransPennine Express 185 rounds the curve approaching Elvanfoot on 1 June 2009. The photograph is taken from near the bottom of ...
John McIntyre 01/06/2009

This single two arch concrete viaduct carried the Leadhills and Wanlockhead Branch (Caledonian Railway) over the Elvan Water on the way to Elvanfoot.
...

This viaduct (also known as Risping Cleugh Viaduct) was built in 1891 by Sir Robert McAlpine & Co. It was an eight arch single track viaduct on a curve. The bridge was clad with terracotta bricks to improve its appearance.
...

The gracefully curved Rispin Cleugh Viaduct near Leadhills on the Wanlockhead branch, built in 1891 by Sir Robert McAlpine & Co. The eight arch ...
John Robin //
1 of 1 images.

This was a single track timber shed to the north east of Leadhills station. The shed was approached from the south.
...

This is a station on a preserved narrow gauge railway. There is a platform, loop and sidings. It is the present northern terminus of the line.
... 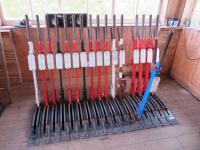 The leverframe inside the signal box at Leadhills on 11th July 2019, which I was informed came from Arrochar and Tarbet box. ...
Alastair McLellan 11/07/2019

This is a short timber platform, the current terminus of the line from Leadhills to the north.
... 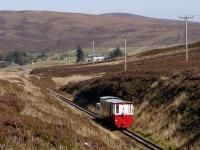 Heading for the hills, or at least Leadhills. Seen from above Glengonnar Halt a train heads away from the cutting on 21st September 2019.
...
Bill Roberton 21/09/2019 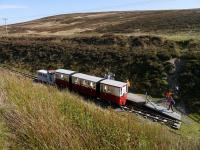 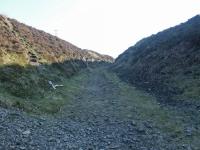 This was a terminus with a loop and sidings and a goods shed. There was no platform, (nor was there a platform at Leadhills) but there was a slightly raised area of flattened ground alongside the loop. Access to the carriages was by means of steps on the carriages. The station building was a lean-to built onto the side of the goods shed, just to the south of the loop.
...

LMS era photograph of a Caley 0-4-4T with a mixed train at Wanlockhead. Of particular interest to the KERS is the veranda coach. This was one of four ...
Knott End Collection //

Looking north at the site of the former Wanlockhead station. ...
Ewan Crawford //

Looking towards Wanlockhead in 1989. The extension of the narrow gauge line from Glengonnar to Wanlockhead has been announced by the Lowthers Railway ...
Bill Roberton //1989
4 of 5 images. more