This was a single platform station. The timber station building was in the Highland Railway style.
...

The last passenger train on the Hopeman branch ran in 1931. Freight to Burghead finally succumbed in 1992 but the old railway yard has now been turned ...
John Yellowlees 01/07/2018 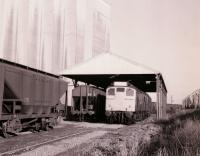 Looking north at the former Burghead (New) station. The building, which stood to the left, was destroyed by arson and has been demolished. ...
Matt Jolley //
4 of 17 images. more

These maltings were opened to the north of Burghead [2nd]. They were rail served and ensured the survival of the Hopeman Branch (Highland Railway) from Alves which had closed to Burghead [1st] in 1966, the Hopeman extension having closed in 1957, save a short siding. This siding was extended north through Burghead [2nd] station, with a loop, to the maltings.
...

This was a single platform station with the platform on the south side of the line. There was a shelter and, at the west end of the platform, a signal box which opened with the station in 1892.
...

This was a single platform terminus with a loop. The station building is in Highland Railway style. The platform was on the north side of the loop. Approach was from the west.
...

Hopeman, probably in1951. My father told me that after the Hopeman goods had finished shunting that day he and I travelled in the loco cab to ...
Alec Unsworth (Courtesy Chris Unsworth) //1951