This alignment opened in 1877 to replace the older (1852) Maryport and Carlisle Railway approach to Carlisle Citadel which had crossed the Newcastle and Carlisle Railway's Carlisle London Road to Carlisle Canal line on the level. A new connection was made into [[Crown Street Goods], also served by the older line. The deviation was due to the opening of the Carlisle Goods Loop (Carlisle Goods Traffic Committee) in 1877, which would have had the Maryport line cross a four track much busier line on the level, thus the alteration. The Glasgow and South Western Railway did not have an independent approach to Carlisle and was to base its locomotives at a shed on this new alignment.

The Maryport and Carlisle built its Currock Shed (M and CR) and Currock Yard here alongside the earlier alignment to Carlisle Citadel. 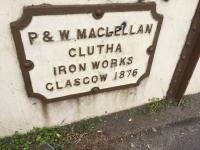 Plate on a bridge in the Caldew area of Carlisle, looking towards Rome Street on 29th August 2019. There was still track under the bridge but it ...
Bruce McCartney 29/08/2019 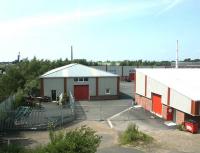 Scene on the former Carlisle goods lines in the spring of 2003 looking north west from Rome Street towards the site of Dentonholme South Junction. By ...
John Furnevel 25/05/2003

The gradually changing scene at Rome Street Junction. View south from Rome Street Bridge in June 2004, with fence posts having appeared on the ...
John Furnevel 04/06/2004