The Great North of Scotland Railway originally terminated at Kittybrewster on the northern outskirts of Aberdeen, with the opening of this extension the line was brought much closer to the centre of Aberdeen and was given direct access to the docks alongside the former canal basin.

The connection from Waterloo to the Aberdeen Railway was by street lines by the docksides and not suitable for long term passenger use. The Denburn line was to directly connect the GNSR to the line to the south and eclipse the Waterloo line.

The Waterloo line and its terminus were to settle down to be goods only, a role the line still has today.

From Kittybrewster Junction to Aberdeen Waterloo.

This junction was located north of Kittybrewster [2nd] station.
... 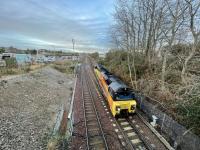 A view from the front of a DMU on 01 June 1974 of Kittybrewster Junction looking north towards the road bridge carrying St Machar Drive over the ...
John McIntyre 01/06/1974 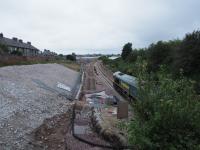 This was an intermediary station in the north of Aberdeen. This station replaced the terminus Aberdeen Kittybrewster and was build to its direct east on the extension to Aberdeen Waterloo, which was much closer to the city centre.
...

Taken from the Kittybrewster Retail Park in October 2018, this is the newly relaid Aberdeen Harbour Branch. The small sign on the right is a reminder ...
Alan Cormack 29/10/2018

This was the terminus of the Great North of Scotland Railway on extension from Kittybrewster Junction to the Waterloo Quay in Aberdeen. The extension followed the course of the former Aberdeenshire Canal.
... 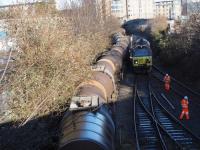 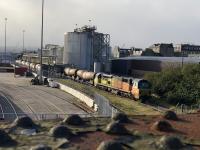 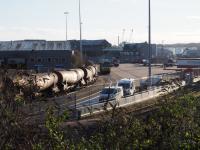