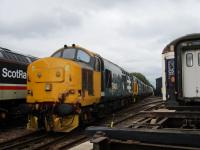 Postland: View of Postland signal box sited opposite Martins Road inside the sharp bend of the B1166 Hull's Drove running between Gedney Hill and Crowland. The road side of the box has now become far more overgrown compared to a John McIntyre view taken two years ago. See image [[63259]]

Renfrew Wharf: Extract from the Scottish Region timetable for winter 1960-61 showing early morning services to Kilmacolm and Renfrew - with its three stations on this line.

Partick East Junction: Fairburn 2-6-4T 42125 approaches Partick West on an afternoon service from Rutherglen to Dalmuir Riverside in March 1964. The fine tenements on Carradale St (left) and Hayburn St (right) have since been demolished, and no trace of the railway now remains, all having made way for the Clydeside expressway and related on-off roads. Note the grain wagons in the siding, probably about to be used for traffic from the nearby Meadowside Granary, situated to the rear of the camera.

Hoghton: The LSL stock move from Crewe to Appleby for the third week of the RCS 'Staycation Express' charter service from Skipton to Appleby is seen heading east at Hoghton on 2nd August 2020. The locomotives again D6817 (37521) leading with 47593 on the rear. Unfortunately shortly after the photo was taken, D6817 shutdown and the move was terminated at Blackburn. The train then returned to Crewe where D6817 was substituted by 37407 and the train headed north again in the evening.

Morecambe Promenade: An aerial image of Morecambe Promenade station, by an unknown photographer. At first glance it appears to be very early with the horse drawn vehicles but the Midland Hotel can just be seen in the bottom corner meaning it will probably be the mid 1930s. The goods yard gave its name to the car park that stands on that site today. Morecambe Euston Rd station can just be seen at the top of the picture. The present day station is approximately at the point where the signal box is in this image, and would be an ideal candidate for a short re-electrification scheme, albeit using the former LNWR tracks rather than the now closed Midland line to Lancaster Green Ayre. 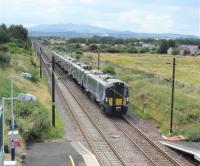 Wallyford: A North Berwick service approaches Wallyford on 18 July 2020. Counterintuitively the hills in the background are the Pentlands, southwest of Edinburgh; the ECML runs more north than south for 20 miles out of Edinburgh. Most Edinburgh folk are surprised to learn that Dunbar is north of the city, not south!

Gretna Green: A down freight about to join the single line north at Gretna Green on 17 July 2008. Work was underway at the time on the redoubling of the 8 mile section to Annan, as well as construction of a second platform and installation of a pedestrian footbridge at Gretna Green station. The route was closed for two weeks on 19 July for completion of the works, including replacement of the junctions, reopening as a double-track railway in early August. See [[19966]]. 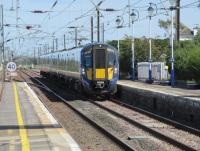 Drem: An Edinburgh service, with the leading vehicle still showing cock-eyed unit numbers, pulls into Drem on 18th July 2020. Drem's population is less than 100. There are tinier places on the West Highland and Far North lines, but apart from those Drem is the smallest place in Scotland with a station. Enough people arrive by car from surrounding settlements to make footfall respectable.