In this phase of the line this was a branch of the North British Railway to Oakley Colliery.

This railway started as the Forth Ironworks Railway, a network of lines serving the Forth Ironworks and its various coal and ironstone mines. On closure of the ironworks ownership was transferred to the North British Railway whose Kinnedar Branch it became serving mines at Oakley Colliery. In the final phase it became the Comrie Colliery Branch from Oakley station with an exchange yard near the junction with the mainline.

This line is closed.

This was a two platform station. It was built over station road, south of Oakley. There was a goods yard to the west, on the south side of the line and served from the west. The main station building was on the westbound platform, just to the west of the bridge.
...

Looking west. A number of sidings ran parallel to the main line in the centre while an extensive yard fanned out right at the start of the Comrie ...
Mark Poustie 23/09/2006 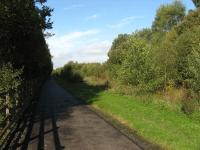 Oakley. The branch to Comrie Colliery (and formerly, to Oakley Colliery) forked off to the right here with extensive BR-NCB exchange sidings. Oakley ...
Mark Poustie 23/09/2006

The site of Oakley station looking towards Dunfermline. The signal box stood on the right here with the down platform straight ahead in the centre. ...
Mark Poustie 23/09/2006

Oakley Station looking towards Alloa. The remains of the demolished down platform are on the left immediately behind the wooden fence. Of the up ...
Mark Poustie 23/09/2006