This narrow gauge railway is out of use.

This railway was built by Sir James Lithgow, the Shipbuilder, to keep men employed after a dro p in ship orders following war. The line was used to take grouse shooting parties into the hills. It may have closed in the late 1970s and is now decrepit. Lithgow still owns the shooting rights on the hills for the next few years.

The railway is narrow gauge. There was a station (parts of the platform still exist) and locomotive shed (still standing) by the reservoir. The route to the north of Hardridge Hill is lifted, the rest of the route appears to be intact. Much of the track is obscured by moor and can only be detected as a depression in the peat. The eastern triangular junction is largely complete and crossed by a recent dirt road. The points remain at all three corners, complete with weighted point level. The line to the south crosses a small viaduct (built from two 'I' beams and a sleepers), possibly the largest such structure on the railway. The western triangular junction is more overgrown than the eastern one. The western points here are overgrown completely, but the western and southern points can be found. The southern points still work. There is a siding at Lairds Seat.

The nearest standard gauge railway was the Greenock and Ayrshire Railway in Kilmacolm. 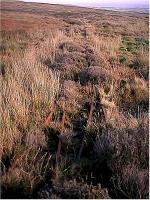 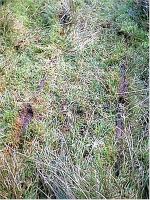 Rails embedded in the moss of the moor, southern section. ...
Ewan Crawford // 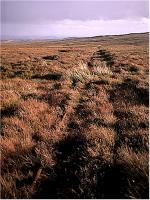 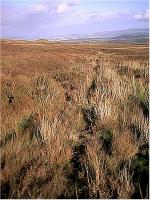