This branch served the Benhar Colliery, a considerable number of pits and mines to the north west of Fauldhouse and Crofthead station. The original line was a tramway which met an exchange sidings with the Wilsontown, Morningside and Coltness Railway. This was replaced with a branch serving the same area.

This tramway ran from an exchange siding west of Crofthead north north west to Benhar Colliery. It was later replaced with a standard railway. 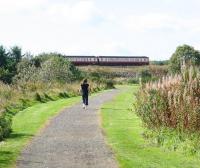 Just to the west of Fauldhouse and Crofthead station the main WM&C line continued west, passing below the Caledonian route, while a branch turned ...
John Furnevel 15/09/2009
1 of 1 images.

This colliery was developed by Barr and Thornton. Its opening obliterated the remains of the old mining village of East Benhar. It remained in operation until 1957. The bing and some surface buildings remain.
...

One and a half miles north west of Fauldhouse in a once intensely mined area of West Lothian stood the small village of East Benhar and its associated ...
John Furnevel 09/09/2009

The freight only branch running west and then north from Fauldhouse and Crofthead station until the 1950s served a number of industrial sites along ...
John Furnevel 09/09/2009
2 of 2 images.