Trains have returned to a heritage railway station in Gwynedd reopened after a three-year, £1.3m rebuild. Porthmadog Harbour Station has been completely rebuilt by local contractors with volunteers and staff of the Ffestiniog and Welsh Highland Railways. Chairman John Prideaux said it had been an ambitious project completed despite the recent terrible weather. Daily services will now operate from the new station and an official opening ceremony will take place on 22 May. 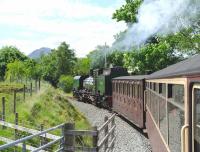 Narrow Gauge locomotive Mountaineer heads out onto The Cob as it leaves the Ffestiniog Railway's Porthmadog Terminus in the spring of 1988.
Location: Porthmadog Harbour [FR]
Company: Festiniog Railway
26/03/1988 David Pesterfield