Salwick: Seen from the Lancaster Canal towpath, two CAF 331 EMUs pass the nuclear fuel plant at Salwick with a Hazel Grove to Blackpool North service on 17th October 2020. See map of this location and the old railway layout of the plant at [[73832]].

Carron Water Bridge [West Carmont]: The site of the derailment has been restored with new track,and drainage and repairs to the bridge.

Grafton East Junction: In September 1905, the GWR took a double track line (just west of Crofton pumping Station) from the Berks & Hants line, the junction being called Grafton East Junction. The line curved round until it met the M&SWJR southbound line at Wolfhall Junction, sometimes known as Grafton South Junction. It was very useful in wartime but it closed in May 1957. These are the bridge abutments where it crossed the Kennet and Avon Canal.

Daventry International Rail Freight Terminal: A Bridged Addition: this sturdy and stylish rail-over-road bridge so far connects two stretches of embankment. The bridge over the A5 has not yet been built -see image [[52516]] - and nor have the sidings parallel to the M1 which will be to the right of this view, after a 90 degree East to North curve. This splendidly isolated bridge seems to be wide enough for 3 tracks; view looks North. Very dark for 7pm!

Kennacraig: The Paps of Jura dominate the skyline as MV Finlaggan prepares to pass Ardpatrick Point at the mouth of West Loch Tarbert on 16 October 2020. On this sailing the vessel will turn towards Port Askaig which is the more northerly of the two Islay ports served daily by Calmac from Kennacraig in Kintyre.

Calveley: An Avanti West Coast 5-car Voyager passes the site of Calveley station on a Crewe to Chester working on 1 October 2020. The up platform and all the buildings have been demolished but next to the Voyager are the remains of the down platform. The skew arch bridge in the background carries the A51 road over the railway.

Bedford Place Tunnel: Scene in Alloa town centre on 27 March 2008 looking south towards the Forth. Down below is the trackbed of the Alloa Wagonway which has just emerged from under Bedford Place. Today much of the old route is a walkway running north-south through the town, the southern extent of which now ends in the middle distance. Dominating the background are the buildings of Alloa Glass Works. Visible near the end of the path (standing on the grass verge alongside) is one of two identical information points along the route, the other being at the north end by the Station Hotel - see [[18968]].

Ballantrae: Now forming part of the sea defences at Ballantrae, and attached to a concrete sleeper, an LMS rail chair from 1947. Did McCulloch Rail, who are based nearby (See image [[34623]]), supply some lifted sleepers to assist the defences?

Elephant and Castle: 700043 to London Blackfriars departing from its penultimate stop at Elephant & Castle on 24th September 2020. 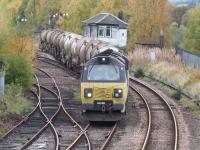 Keith: COLAS 70810 on 6Z42 at Keith on 28th October 2020. The diverted china clay tanks seem to be running twice a week now and I am wondering if the climb out of Inverness towards Perth has something to do with that as there does not seem to be the same number of wagons in tow. Keith signalbox looks as if has seen better days. 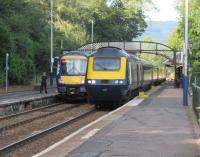 Dunkeld and Birnam: Passing trains at Dunkeld on 29 September 2020. Platform 2 (left) is only used when passing, possibly because it is accessible only by that footbridge with rather treacherous steps. The Edinburgh service is in charge of an HST; despite all the trumpeting they still form only a minority of services two years on from their introduction.