Pitlochry: 43310 heads north at Pitlochry on 16th April 2019, when red HSTs were still on the Highland Main Line. After LNER service 43310, transferred to Neville Hill to work for East Midlands Railway. The train is seen here from the balcony at Pitlochry Lineside holiday accommodation.

Kildwick and Crosshills [2nd]: The site of the second station at Kildwick and Crosshills, viewed west from Station Rd bridge on 26 September 2020. The station moved around 500 yards west to this site in 1889 but closed in 1965. There is no trace of the platforms or station buildings although there are railings in the undergrowth leading from station road to the former up platform.

Watherston Bridge: A train on the Borders Railway meets a car on the A7 near Watherston Bridge (right centre background) on a fine spring morning in 2014. The train is the 0958 ex-Tweedbank and its next scheduled stop will be at Gorebridge, just under 15 miles to the north.

Wormald Green: Looking south along the extant platforms at Wormald Green station (closed 1962) between Ripon and Harrogate in October 2020. The old station sits alongside the long distance A61 trunk road that ran between Thirsk and Derby, but now ends at Alfreton where the A38 extension north, running to the M1, has taken over its route between there and Derby. The up platform is on the left of the picture and a railway worker's house is next to the main building.

Glasgow Queen Street High Level: Officina Sans Bold is not usually quite as bold as this. Lettering above the front entrance, facing George Square. I wonder why the E&G didn't choose George Square as the name for its new station? After all it was never on Queen Street itself and George Square was certainly well established by 1842 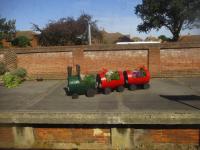 Frinton-on-Sea: Abandoned loop platform at Frinton-on-Sea, on the single track branch from Thorpe-le-Soken to Walton-on-the-Naze in Essex, seen from a Walton service on 18th September 2020. It opened in 1867 with a single platform but was provided with another, and a crossing loop, in 1938. However, this had fallen into disuse by the 1960s; in 1965, on a boyhood holiday at Walton, I went for a ride to Colchester and back and the platform was out of use by then, with track removed.