Crooklands Wharf: This office at the entrance to the Crooklands Wharf coal merchant's depot, seen here in 2020, appears on the 1896 OS 6-inch map [[74601]], which also shows a tramway siding running through each of the two gated entrances onto the canal wharf. Coal and other supplies would be unloaded from barges here and taken by the horse tramway to Gatebeck Powder Works, about one and a half miles north of here along the Peasey Beck valley. Crooklands Wharf, and nearby Wakefield's Wharf, on the non-navigable stretch of the Lancaster Canal, are only a mile from Junction 36 of the M6 and a very interesting historic site to visit.

Didcot Parkway: GBRf 66737 should have been heading north to Oxford etc but alas, just as it crossed the Oxford bound points at Didcot, a failure occurred and the train ground to a halt. No idea why but all went quiet. 7th October 2020.

Coventry: A Voyager from the South looks for shelter from the rain as it approaches Coventry from the Leamington Spa direction. See image [[74046]] for the opposing movement. 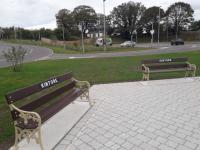 Worleston: Looking west from a road bridge, the site of Worleston station on 1 October 2020, with the station building on the left which has been in private ownership for some time, the station having closed in 1952. The building has the street level entrance at first floor level while downstairs is at platform level.

Bathgate: A ScotRail 158 DMU on a shuttle service to Waverley photographed during turnaround at Bathgate on 20 October 2010. The new station had opened two days earlier, replacing the former single platform terminus. Meantime work on the reopening of the line west towards Airdrie was nearing completion, with the first through electric trains taking over passenger services in December that year.

Low Marishes: The former Low Marishes crossing keepers' bungalow, seen across the trackbed, sits on the north side of the local road running to Yedingham from the A169 Malton to Pickering road. It is L shaped to create two workers' dwellings, with a further recessed feature to the rear where the large single window opening had been bricked up many years ago to allow a chimney stack to be built partially over the window area. 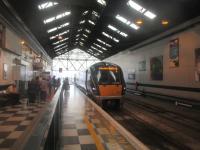