Locations along the line

Lady Victoria Pit was served by a large yard and sidings warranting their own signal box. A major expansion of the Newbattle Colliery led to a new connection and exchange sidings being laid out on the east side of the Waverley Route. The whole scheme was built on a grand scale and included the new village of Newtongrange, to the north. The pit was named for Lady Victoria Alexandrina, wife ... 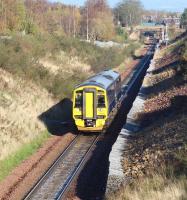 A 4-car DMU on a Tweedbank – Edinburgh service about to pass below the bridge carrying the B704 road as it approaches the Newtongrange stop on 9 ...
John Furnevel 09/07/2017

Looking west towards Lady Victoria in September 2019, with the houses of Colliery View immediately behind the camera. The roundabout provided a ...
John Furnevel 01/09/2019

The main entrance to the National Mining Museum on 5 September 2019. When the Lady Victoria commenced production in 1895, wagon loads of coal bound ...
John Furnevel 05/09/2019

The original level crossing at Lady Victoria see image 70784 was replaced early in the twentieth century by a bridge spanning the A7 to the north ...
John Furnevel 20/10/2019