This military railway ran from Cairnryan Junction, Stranraer to a military harbour at Cairn Point. The name of the line could be abbreviated to CMR. Cairnryan was also known as Military Port number 2.

This junction opened with the Cairnryan railway (Military Port No 2) in 1942. A second hand Caledonian Railway signal box was used, placed on the south side of the line where the sidings were on the north side, approached from the east.
... 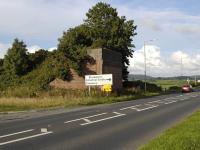 Two fast vessels passing off Cairnryan around 2008. This video still shows ^HSS Stena Voyager^ and the P&O ^Superfast Express^. The HSS was taken out ...
Colin Miller //2008