The Class 58 Locomotive Group is proud to announce that on Monday 28th June 2010 DB Schenker confirmed that a bid placed for the purchase of Class 58 No. 58016 had been accepted and thus the locomotive would become the first preserved example of its type. Since the announcement of the freight company’s recent tender list, on Monday 19th April 2010, the C58LG committee and its supporters have been working hard, realising that this first opportunity to consider purchasing a Class 58 was potentially too significant to ignore. [From Mark Bartlett]

The unique 47901, photographed on Westbury shed on 17 December 1982. The locomotive was running as an operational test rig for the class 58 engine at this time and had previously been used on a similar basis for testing class 56 traction equipment. The locomotive was finally withdrawn in 1990. [See image 23153]
Location: Westbury Shed
Company: Frome Branch (Great Western Railway)
17/12/1982 Peter Todd 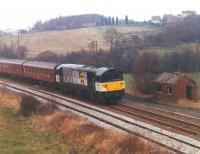