A railway station near the 2014 Commonwealth Games village has secured £2.8 million in European funding towards a major refurbishment, it has been announced. [Railscot note: Herald article shows image of Waverley]

Entrance to the low level Dalmarnock station, looking north along Swanston Street towards the junction with Dalmarnock Road early on a Sunday morning in April 2007. The high level route visible behind the station is the remains of the Switchback, which crossed Dalmarnock Road on a bridge off to the left [see image 23436]. The first Dalmarnock station was opened on this high level line in 1841, but closed in 1895 on the opening of the Glasgow Central route.
Location: Dalmarnock
Company: Glasgow Central Railway
01/04/2007 John Furnevel 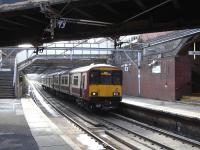