Launch of the 'Rails to Grantown' appeal [Press and Journal]

Nearly eight years after the re-opening of the original Highland Main line between Boat of Garten and Broomhill and eighteen months after reaching the River Dulnain, the Strathspey Railway Charitable Trust launched the ^Rails to Grantown^ appeal at Broomhill Station, near Dulnain Bridge yesterday. Local and national politicians as well as leaders of the many organisations that are giving support to the project attended. The intention of the appeal is to raise at least £182,000 in the current year, part of the estimated £5M it will cost to restore a train service to Grantown-on-Spey.
Braeriach, a 0-6-0 tank locomotive formerly on the Weymss Private Railway, pulling the LMS Inspection Officers Saloon heralded the launch of the appeal event at noon. During the afternoon, this train took guests down some of the new track already laid towards Grantown. [With thanks to Sue Davies] 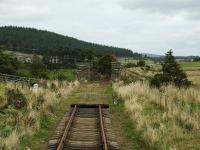 Drivers eye view of the approach to the site of Dulnain Bridge on 10 October 2008. [With kind permission of the Strathspey Railway.]
Location: River Dulnain Viaduct
Company: Inverness and Perth Junction Railway
10/10/2008 John Gray 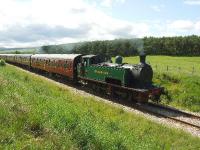