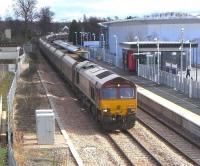 EWS 66004 passes through Alloa on its way back to Hunterston on 4 March 2009 with Longannet empties, dwarfing the 3-car 170 at the station platform forming the next service to Glasgow Queen Street.
Location: Alloa
Company: Stirling and Dunfermline Railway
04/03/2009 David Panton 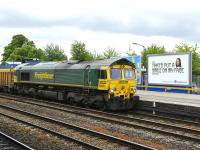 There's no answer to that... Freightliner 66607 looks puzzled as it pulls up with a northbound ballast train at Oxford on 17 May for a crew change.
Location: Oxford
Company: Birmingham and Oxford Railway
17/05/2011 Peter Todd