SHE was the beloved railway cat who warmed the hearts of hundreds of commuters on the platforms of Livingston North station. For years, fluffy Keira affectionately brushed the ankles of waiting passengers and could be seen sprawling out in comfy alcoves across the West Lothian halt. But following her untimely death this week, an outpouring of grief from her many fans has seen coffers of a feline welfare charity swell as cash rolls in to protect and rehome moggies less fortunate than the popular railway cat. And now there have been calls to erect a permanent memorial in honour of Keira, who was so renowned she had her own Facebook page boasting more than 1200 likes. [From John Yellowlees] 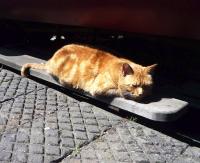 Off duty member of staff at Grosmont shed in September 2011. [Alan Hardie adds - The cats name is Erica (after 45428 Eric Treacy) and has its own ID card pinned above its bed in the repair shed. The shed shop staff feed her.]
Location: Grosmont
Company: Whitby and Pickering Railway
26/09/2011 Colin Miller