The last passenger train left Leith North for Edinburgh Princes Street on Saturday 28 April 1962. Today on the eve of the fiftieth anniversary members of the Capital Rail Action Group visited the station building at Newhaven, last survivor on the line, which Richard Arnot is turning into business accommodation. 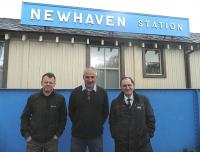 View west along the trackbed at the old Newhaven station on the Caledonian Leith North branch on 15 March 2009. The goods lines ran to the right of the former down platform, most of which has now been removed. The street level booking office on Craighall Road was used by a local joinery firm for many years following closure in 1962, but the building is now deserted and in a generally poor state of repair.
Location: Newhaven
Company: Leith North Passenger Branch (Caledonian Railway)
15/03/2009 John Furnevel 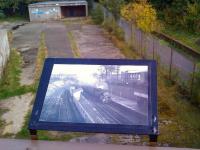 Looking over the platform remains from the former Newhaven Station booking office [see image 36401] on 25 September 2011. View is east towards Leith North and the docks. The large picture board shows a photograph taken from the same spot in the early sixties.
Location: Newhaven
Company: Leith North Passenger Branch (Caledonian Railway)
25/09/2011 Grant Robertson