Gore Glen Bridge: An early afternoon southbound service on the Borders Railway photographed crossing the Gore Glen Bridge above the A7 on 25 September 2015.

Airdrie [CR]: The sandstone block wall seen here is the pathetic remains of the former Airdrie terminus of the Caledonian. The view is to the east. The tracks and platform were above, now the site of a car park. This portion of the platforms was covered by a glazed trainshed. The buffers and circulating areas were off to the left. Closure to passengers was in 1943, complete closure in 1964 when the line was cut back and a buffer stop installed at the former Cairnhill Junction.

Cawton Gate Crossing: Cawton Gate crossing was across a narrow local road on the eastern edge of Cawton village, and was around 500M east of where the Pickering line diverged north from the Malton line after both ran in parallel from Gilling East Station. North East of the crossing were two keepers cottages which are still in use. The view is looking east, with a conservatory added to the south side cottage, and the line ran to the right of the view. The mother of the present lady occupier of this cottage was the crossing keeper upto closure of the line. 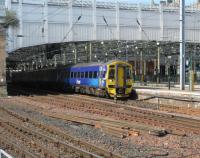 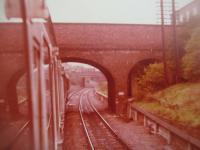 Hornsey Road: Shortly after the diversion in January 1981 of the Kentish Town to Barking service, from Kentish Town to Gospel Oak along a line that had been freight only since 1925, a train from Gospel Oak to Barking heads east past the site of Hornsey Road station, in April 1981. This closed as a WWII economy on 3rd May 1943, as did Junction Road on the same line. Another, further east at St. Anns Road near South Tottenham, had closed on 9th August 1942, for the same reason but the three stations never reopened after 1945. The GOBLIN, as the line became nicknamed from 1981 by the initials of the two termini stations, was taken over by TfL and became part of the London Overground network in 2007 but remained diesel-worked until belatedly electrified in 2019.

Crewe: This memorial plaque at Crewe pays tribute to the rail staff who were brutally assaulted in the Great Train Robbery of 1963. In memory of Jack Mills and David Whitby who gave great service to the railway. Both showed extreme bravery whilst at the controls of IM44 Glasgow Central to London Euston Royal Mail train in the early hours of Thursday 8th August 1963.

The Shore [Tram]: Tram works in progress in Constitution Street, looking south with Calton Hill in the distance, on 27 March 2021. 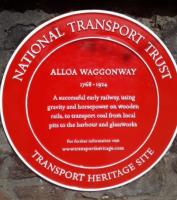 Ellenbrook: The 4.5 mile guided busway to Leigh starts at the site of Ellenbrook station, although the bus stop here is now known as Newearth Road. The station closed in 1961, eight years before the loop line from Kenyon Junction to Patricroft succumbed. The busway has been ramped down to join the road but the embankment beyond illustrates the original elevation of the railway (and station), and also marks the start of a greenway through Worsley that appears to be very well used.

Arnside: Signalbox with a view - Arnside on the edge of the Kent estuary, between the station and the viaduct over the river. The location could be described as a little exposed but on this bright and sunny day in January 2018 it looked like the place to be.

Partick: A Milngavie to Springburn service calls at Partick in September 1997 in charge of Class 314 (of blessed memory). Also consigned to history are the flippy-flappy departure indicators and the rather unlovely platform buildings in smoked plastic.