Garstang and Catterall: Intermodals passing at Garstang and Catterall on 27th February 2021. 66433 is working from Daventry to Mossend. 90008 'The East Anglian' and 90007 'Sir John Betjeman', both still in Greater Anglia grey, are bound for Crewe with containers from Coatbridge.

Nuneaton: The lettering and heraldry on the ersatz Midland Pullman (see image [[75173]]) certainly looks the part.

Euxton Balshaw Lane: A pair of LSLs green Class 37s head north near Euxton Balshaw Lane with an ECS working from Crewe to Berwick-upon-Tweed on 4 March 2021. The train is scheduled to then return to the west coast and head south along the Cumbrian Coast. Friday sees the train travel south before heading north over the S&C and the Sou-West main line to Kilmarnock and Carstairs! The WHL is billed as the destination for the weekend, ECS all the way.

Bonnyrigg: The former Bonnyrigg station closed to passengers in 1962. The area has since been landscaped and now forms part of the Penicuik - Dalkeith Walkway. View is north east along the down platform on 5 March 2011 in the general direction of Eskbank. The line ran straight ahead over a level crossing on Cockpen Road and through the site now occupied by the houses directly opposite, with those to the right built on the old goods yard. As a result, the walkway deviates slightly east at the crossing to run along the road between the houses (named Waverley Court) before rejoining the original route 250 yards further on. 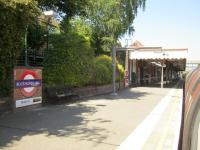 Buckhurst Hill: Buckhurst Hill, Essex, seen from LUL 1992 stock on a Central Line service to Epping, on 24th July 2012. This station was opened by the Great Eastern Railway in 1892, replacing the Eastern Counties Railway station of 1856 and was first served by tube trains when LT electrification was extended from Woodford to Loughton on 21st November 1948. The station house and a short piece of platform of the 1856 station are still there to the south of the present station and once separated by a level crossing, abolished when the line was electrified for tube trains.

Gorbals Junction: A solitary Hillman Husky is parked on Hospital Street, at the western end of Glasgow's Gorbals district, as Kingmoor Black 5 44911 passes above with the 17.30 Glasgow St Enoch-Carlisle. 31st March 1965