Bermuda Park: Lockdown blues were blown away by the sight of 66596 powering up the grade to Bermuda Park. I chose this platform because the freight train could have been blocked by a departure for Leamington on the other platform; but I like the trees on the left balancing out the distinctly man-made warehouse on the right. The light dusting of snow on the plates of the canal bridge makes a change from their usual dark colours. Note for enthusiasts: this is train 456P from Southampton to Birmingham Lawley Street.

Preston (Old Tram Bridge): A view from the top of the rope worked canal tramway incline in Preston. A winding house stood near this point to lift wagons up from the river bridge to a level where they could continue to the canal basin near the town centre. The incline closed in 1864 and has now been landscaped into the park features but the replica tramroad bridge over the Ribble can be seen through the trees in this view from December 2020.

Dalmeny Junction: Passing trains at Dalmeny Junction in the summer of 2008. A 170 destined for Waverley is about to pass a northbound 158 below the road bridge carrying the A90. The line to Winchburgh Junction runs off to the right, while on the left beyond the fence is the trackbed of the South Queensferry branch, now a walkway. 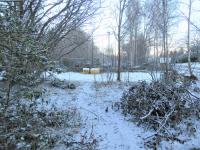 Craigleith Quarry: After building Edinburgh's New Town (two miles away) the stone from Craigleith was sent all over the UK - and beyond. Transport must have become way easier when the quarry became rail connected. We are on the trackbed looking north, just to the right of Craigleith Jn. There was a small works ahead and the quarry track curved to the right. 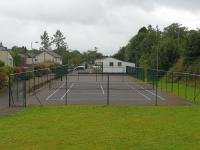 Drimoleague: Drimoleague Station site, looking west in June 2020. Beyond the platforms the line to Skibbereen and on to Baltimore diverged left and the line to Bantry continued straight on. The platform on the right was originally an island platform and a small turntable was located in the bottom right of the picture. Taken from the site of a now filled in overbridge.

Carlisle: Fortunately, 56068 is located in a designated outdoor smoking area at Carlisle as it considers its next move. I was passing through on a railtour, the details of which elude me at present. Notice the TPO stock in the background. 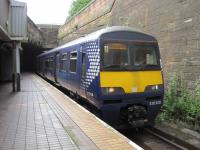 Stonehaven: The southbound platform building seen at dusk in 1997.