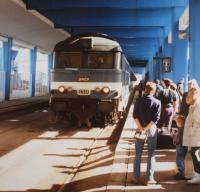 Boulogne Maritime: The classic diesel traction of SNCF Class BB 67400 hauls the incoming Paris train into the postwar trainshed at Boulogne in 1992. This was part of the new combined car ferry terminal and harbourside railway station opened in 1952. The previous station building from 1875 was heavily damaged during the 1940 Invasion of France and units of the Welsh Guards were engaged in defensive action in various parts of the structure and outbuildings before being forced to withdraw by sea. The remains were then totally destroyed by Allied bombing in the lead up to Operation Overlord when Boulogne Harbour was attacked from the air. In the postwar period the new station saw use as the departure point for the VSOE to Istanbul and, later, Venice. A good view of the layout and location of the Pont Secteur see image [[74222]] is available here: http://hhvferry.com/blog/?p=1969

Gort: View of the closed station at Gort in 1988, taken from the signalbox and showing stored wagons in the goods yard. Passenger services had ended on 6 April 1976 but were reinstated on 29 March 2010.

Glasgow St Enoch: An unusual visitor to Glasgow St Enoch, on 27th August 1965, was Bank Hall’s Standard Class 4MT 4-6-0 75026, fresh from overhaul in Cowlairs Works. It had brought in a local service and would shortly take charge of the 5.20pm to Busby. The loco was at one time based at Machynlleth for Cambrian Coast duties, and had been fitted with a double chimney during a visit to Swindon in 1962. Swindon also applied BR green paintwork and this was duly retained during the Cowlairs overhaul.

Banks: Looking towards Crossens and Southport from the site of Banks station on 3rd November 2020. The trackbed seen here is narrower than it would have been originally as this large drainage channel was only excavated after closure.

Warminster: A BRCW Class 33 departs from Warminster heading to Salisbury with a service believed to have been from Cardiff to Portsmouth in May 1985.

Blacksboat: Weak sunshine filters through the foliage to illuminate the well preserved old station building at Blacksboat on the former Strathspey line in May 2012. Photograph taken from the road bridge looking south towards Grantown-on-Spey. The trackbed here is now part of the Speyside Way.

Bank Junction: A class 60 slowly draws a loaded coal train from Knockshinnoch Washery onto the G&SW main line at Bank junction in 1997.

Craigendoran: An Edinburgh to Helensburgh service nears journey's end at Craigendoran on 7 October 2020. Notice how close the banner repeater is to its associated signal, the Craigendoran Junction home, and how it is placed on the 'wrong' side. 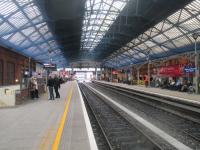