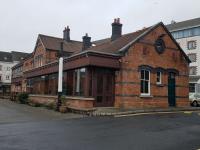 Clifden: Clifden Station looking west. The Galway to Clifden Branch (sometimes called the Connemara Railway) was built as a light railway but to standard Irish gauge opening on 1 January 1895 and closing in April 1935. Clifden station has been reveloped as the restaurant and bar for the Station House Hotel. A massive new signal box style upper floor has been added at the buffer stops end. In fact the actual signal box was at the Galway end of the station. Photographed on 7 March 2020 but see image [[19746]] taken in 1988.

Burton and Holme: An Avanti Pendolino runs south at Burton and Holme on 5th September 2020, seen from the elevated towpath of the old Lancaster Canal. Old maps show a long siding (or short branch) running alongside the lane in the foreground, on the opposite side of the wall, from Burton and Holme station to Holme Mills.

Big Pit Mining Museum: Here is a picture oozing with atmosphere, from the sleeper crossing in the foreground and the foundations of a demolished hut to the pit props waiting to be used underground. The dark horizontal line across the hills in the background is also historic. According to local legend, a large excavator had been shipped to Blaenavon in parts and built on site to do a job. Its next job was just a few miles South, so they used it to dig its own road along the hillside. This took place shortly after WW2 - presumably, the word remediation had not yet entered the dictionary.

Princes Street [Tram]: 'Stand aside I say...' Buses, cars, cyclists and pedestrians are brought to a halt at the east end of Princes Street on 11 April 2014 as an Edinburgh Tram emerges from South St Andrew Street to sweep majestically around the curve on its way to the airport. 'Ping!'

Wolsingham: View along the west end of Wolsingham station platform with an overbridge at the platform end, on the currently in limbo Weardale Railway, following its closure by British American Rail Services, and subsequent sale to a regional community organisation. An access ramp comes down from the road to enter the platform at right of view. The running in board is in need to some TLC on the top corner. Some work is being carried out to hopefully bring the line back into operation in 2021.

Trinity Junction: A very minor railway junction makes an odd entry in the Ordnance Gazetteer of Scotland (1885, my collection). What is even odder is that it surely didn't exist. Bangholm is where the CR Leith Line crossed the NBR Granton branch, which is what they must have meant, but there was never a chord between them. Nearby Trinity Junction was NBR only.

Farringdon: The sign on the green wall says Farringdon Junction. Looking South from the platform end at Farringdon Thameslink in 1995, this shot shows the (now closed) lines to Moorgate (Thameslink branch) curving off to the left and Snowhill Tunnel towards City Thameslink and Blackfriars Stations straight on. Note the transition from OHLE to third rail just before the tunnel portal. This station has changed drastically since the Thameslink (originally Thameslink 2000) upgrade was completed and this location no longer exists.

Lowestoft: A Railfreight Class 37 hauls an unusual load to the passenger station at Lowestoft-a first generation DMU. Photo taken over the deck of the Sailing Trawler Excelsior, a preserved boat, which provides sail training see theexcelsiortrust.co.uk.

West Brompton: 378 224, working third rail with a London Overground service from Clapham Junction to Willesden Junction, approaching West Brompton station where platform lengthening was taking place, on 24th May 2014. On the left, the LUL District Line branch to Wimbledon, which has its own platforms here, descends to pass obliquely beneath the LO tracks, the latter also served by Southern trains. See image [[6247]].