Edinburgh Waverley: The platform canopy roofing at Edinburgh Waverley looked much in need of repair in June 1966. Black Five 44954, with a nicely cleaned cabside number, waits to take empty stock from the station.

Brock: 66112 runs through a sudden rain shower between Garstang & Catterall and Brock on 3rd September 2020. The train was a short rake of MOD wagons that had started from Glen Douglas that morning heading for Fenny Compton.

Brock: WCRC 47804 and 47802 are seen at Brock on 29 August 2020 with an ecs move from Carnforth to Bristol in readiness for a railtour in the south-west the following day.

Pickering: Scene on the North Yorkshire Moors Railway at Pickering on 28 September 2010 with a recent arrival from Whitby disembarking at platform 1. The locomotive is class S15 4-6-0 No 825 (minus smoke deflectors), built at Eastleigh Works in 1927 and withdrawn from Salisbury shed (as BR 30825) in January 1964.

Harome Siding: A moderate distance north of Harome Siding there were two bridges in close proximity to each other, one a skew farm access road overbridge and the next an accommodation/ footpath rail overbridge. The skew bridge has been demolished as it was unsuitable to larger farm equipment, but the other bridge is still fully extant. Whereas today there is a level farm access road, there previously existed a narrow humped skew overbridge crossing the railway which crossed just beyond the pile of aggregate seen to the left in a view looking west. This was bridge HMY7. 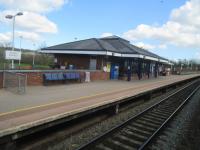 Tiverton Parkway: Tiverton Parkway, seen from passing UK Railtours' excursion from Paddington to Barnstaple for the Lynton & Barnstaple Railway, on 17th April 2016. On 5th October 1964, all the intermediate stations between Taunton and Exeter St. Davids, with the exception of Tiverton Junction, were closed even though the line into Tiverton from there closed on the same day. Tiverton Junction, which also served the branch to Hemyock (closed 1963), eventually closed on 11th May 1986 but was replaced the next day by Tiverton Parkway, to the north and on the site of Sampford Peverell station. This was more convenient for connecting buses to Tiverton town. Why wasn't the branch line to Tiverton itself simply kept open? In late 2019, a proposal to reopen Wellington station was announced but so far little has been heard further of this, nor an earlier proposal to reopen Cullompton station. 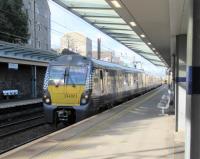 Haymarket: An incoming service from the Airdrie - Bathgate line pulls into Haymarket on 2 September 2020.