Glenoglehead Crossing: Remains in the undergrowth alongside the trackbed at the north end of Glenoglehead Crossing in May 2008 include the base of the former down starter. The signal itself can be seen as it was shortly before removal 42 years earlier in the background of image [[31542]].

Auchincruive: The out of use oil depot at the former Auchincruive station seen in a view looking west in 1997. The Ayr-Mauchline line is off to the right. 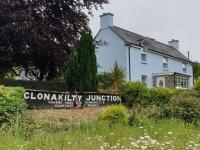 Clonakilty Junction: Clonakilty Junction. Original and now rather dilipidated nameboard with the former station master's house to the right. The station is located in the village of Gaggin (also spelled Gaggan). There were three platforms, including an island platform. The nine mile branch to Clonakilty diverged south from the main line here, opening in 1886. A further branch to Courtmacsherry diverged from the Clonakilty branch at Ballinascarthy (birthplace of Henry Ford's father). The system closed on 31st March 1961 and the N71 road was subsequently re-aligned here along the former trackbed.

Hurst Green Cutting: The railway that never was. In 1847 the Fleetwood, Preston and West Riding Junction Railway excavated a cutting near Hurst Green, on a proposed line from Preston to Clitheroe which would have diverged from the Preston and Longridge Railway near Grimsargh. As the company name suggests however this was part of a much bigger scheme, a main line ultimately connecting Fleetwood and Hull. Although the short double track connection from Deepdale Junction through to the main line was completed the rest of the scheme was fairly quickly abandoned and this 200 yard long, double track cutting has slumbered in the beautiful Ribble Valley countryside since 1848. On 22nd June 2020 it was easier to imagine that tracks had been lifted from this cutting rather than never laid. This view looks west towards Preston with the trees concealing a steeply sided deep valley that would have required a substantial viaduct to be constructed.

Coanwood: Coanwood, on the former Alston branch, after vegetation clearance - which we appreciate. See image [[2468]].

Fountainhall: Down among the daisies. Standing in a field at Fountainhall in June 2017 looking south east along the Gala Water. The lattice girder bridge once carried the old road, linking the A7 (off to the left) with the village (beyond the trees) passing over a level crossing in front of the abandoned station house in the background (see [[28512]]). The train is Edinburgh bound, in this case one of the services running non-stop over the 21 miles between Galashiels and Gorebridge. Part of the bridge carrying the new road across the line and into the village is just visible on the far right. 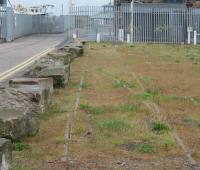 Granton Pier: It doesn't seem to have been thought worthwhile to remove this remnant of the railways of Granton and tar the area over. Either that or it has been left as a memorial. View looks towards the end of the middle pier.

South Ealing: Refurbished LUL 1973 stock, with a Piccadilly Line service to Cockfosters, arriving at South Ealing station on 25th January 2014. This station was originally opened in 1883 with the Metropolitan District Railway's Hounslow branch from Mill Hill Park (renamed Acton Town in 1910). Piccadilly Line tube trains were promoted on west from Hammersmith in 1933 which saw the line between Turnham Green and Northfields quadrupled with rebuilt stations at Acton Town, South Ealing and Northfields. Today, the north side of the quadrupled line between Northfields and Acton Town is used as a test track only although in the opposite direction the two Heathrow bound tracks are still available for passenger trains. (Chiswick Park station was also rebuilt in 1933 but is served exclusively by District Line trains running to and from Ealing Broadway. The last District Line trains along the Hounslow branch ran in 1964.)