Aviemore: A Wickham railbus seen at Aviemore in 1959.

Drem: Looking east from Drem station in 1982 with the goods sidings in the foreground. I believe these remained in use into the 1970s for seasonal seed potato traffic, but were later reduced to a single siding for the engineers. A class 40 waits in the down loop with tanks for Leith South while a coal merchant makes a local delivery on the road. 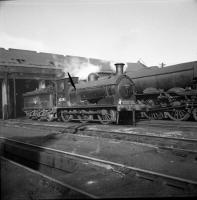 Preston: 50049+50044 on the front of a railtour that had just arrived back in Preston a few minutes before midnight on 19th November 2011. The train is waiting to depart ecs to Carnforth.

Prittlewell: Prittlewell station is the first and last stop from and to Southend Victoria that opened with the GER line from Shenfield in 1889 and since the 1950s has been a busy outer commuter route to and from London Liverpool Street. The name Southend derives from the fact that, in the Middle Ages, it was a settlement at the south end of Prittlewell Parish and Southend today is now the largest town in Essex with the world's longest pier. It is not really 'on Sea' but on that part of the Thames Estuary where it widens out to meet the North Sea at Shoeburyness. This photograph was taken from a train to Southend calling on 23rd April 2014.

Salsta: How do you ensure that your cargo gets to its destination if it lies beyond the wired-up section? Take your last mile haulage with you. Two electric locos, Hector Rail Class 143 (ex-SJ Rc3) are supplemented by a diesel electric shunter T43 (GM EMD) to enable the load to complete its journey by rail. A trainload of empty woodchip wagons heading from Värtahamn in Stockholm where it had left its load at a power station see image [[61156]].

Hadleigh: After final closure to freight traffic in April 1965, Hadleigh station and its surrounds were sold off to the local council for use as a maintenance depot. It is pictured in this guise on 29th October 1978, the view being towards the end of the branch. Subsequently, the area was sold on again for new housing, and although the original station building and canopy were preserved within the development, it ended up rather imprisoned by the new builds.

Bay Horse: ROG 37800 'Cassiopeia' heads through the cutting at Forton, to the south of Bay Horse, taking EMU 317340 back to Ilford on 20th June 2020 after PRM modifications at Brodie Engineering. This has become a regular WCML weekly working during 2020 with a Greater Anglia EMU dragged to Kilmarnock on Fridays and another returned home the following day.

Uffington: Rail Operations Group 47815 'Lost Boys 68-88', and also with NHS logos, hauling a rake of condemned Mk 3 coaches past Uffington on 15th June 2020. This ran from Ely Papworth Sidings taking them for scrapping at Newport Docks. The former D1748 had an interesting role in 1976 when, as 47155 with bogies and buffers removed, it was transported by road from Stratford to West Thurrock power station to act as a temporary stationary generator for three months.