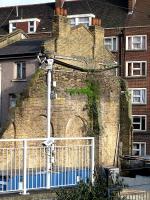 Homerton: This partially demolished interior side wall is all that remains of the entrance to the original North London Railway's Homerton station, seen here on 11th December 2010. The line here was opened by the convolutedly-named East & West India Docks & Birmingham Junction Railway in 1850 but renamed to the simpler North London Railway in 1853. It was not until 1868 that the NLR opened Homerton station and it survived until 1944 when heavy war damage precipitated the end of the Broad Street to Poplar service. For 35 years after, this section through Hackney remained an important freight route (and still does) and was suddenly reopened to passengers in 1979 with trains running to Stratford via the link with the GER at the former Victoria Park station. New stations were opened at Hackney Central and Hackney Wick in 1980 and Dalston Kingsland and Homerton in 1985, from the eastbound platform of the latter this photo was taken. However, I first travelled on the line on a RCTS railtour in October 1967 when still in my teens and which also traversed the now abandoned and built-over section of the NLR through Old Ford while the Bow to Poplar section was revived for the Docklands Light Railway in 1987. 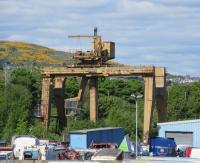 Portobello Freightliner Terminal: Portobello Freightliner Terminal has been closed for considerably longer than it operated but for some reason one of its two cranes was never scrapped. It hardly has the iconic status of, say, Glasgow's Finnieston Crane. Photographed incidental to my daily exercise permitted under emergency coronavirus legislation.

Pitlochry: Looking over the coal yard at Pitlochry with a class 24 calling in 1972. The type 2 is in green livery, but with the double arrow symbol. It looks like coal was dumped on the ground, with a stockade alongside the sidings.

Interlaken Ost: 460108 crosses the River Aare, which links Lakes Brienz and Thun through Interlaken, while working an express service that has just started from Interlaken Ost on 19th June 2016.